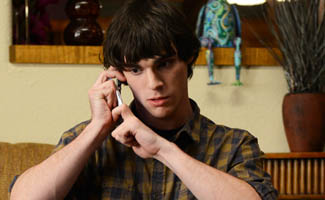 RJ Mitte, who plays Walter, Jr. on Breaking Bad, talks about the muscle cars he gets to drive for work, shares his surprising nickname and hints at Walter, Jr.’s secret activities.

Q: First things first: Walter, Jr. got the Challenger back this season! How much did you get to drive it on set?

Q: Last year you told us you were trying to get a Vespa. Any luck?

A: Instead of the Vespa I bought the Cougar, but I’m going next week to get my M1 license. I’ve been riding bikes since I was a kid, and I miss it. My last bike I crashed into a brick wall — it just jumped out of nowhere — and I haven’t ridden anything since.

Q: I hear a lot of chatter about people wanting to see Walter, Jr. get a piece of the meth-making action. Have you petitioned the writers for this?

A: I’m trying to get over to the writers’ room and put little bugs in their ears, but I think the writers will come up with an awesome story for Walter, Jr. in the next eight. There’s so many things that people still don’t know about him. What would anyone say when they found out the biggest kingpin meth distributor in the world, pretty much, was their dad?

Q: What story lines have you pitched the writers?

A: I’ve definitely considered Jesse and Walter, Jr. cooking meth in lab that his dad left. They’re pretty much brothers, if you think about it. But I could also see Walter, Jr. and his father hanging out and cooking some meth and chilling in their new rides.

Q: Walter, Jr. still gets called Flynn. Do you have multiple names around your house?

A: I have two. I have my real name and RJ. I’ve gone by RJ since I was eight, but I was named Roy after my grandfather. They called me Little Roy which sounded like Leroy with a Texas accent, but my mom didn’t want to have a Leroy as a son, so it went to RJ.

Q: Walter, Jr. and Holly spend much of this season at Hank and Marie’s. Have you ever spent a prolonged amount of time away from home?

A: I spent a long time away from my parents when I was younger. I would go hunting and fishing with my uncle, and we would go for weeks at a time. I also spent a lot of time in Texas with my grandparents. I don’t mind it — it gives you a new point of view. The more you travel, the more well-off you’ll be, I think. The three month period living at the Schrader house has probably changed Walter, Jr.’s personality a bit.

Q: What do you know about Walter, Jr. that we don’t?

A: There’s a lot. You remember a couple seasons ago he got in trouble for beer? He’s 16 years old and he’s got a brand new hot rod car. Think how much trouble can he get in with that.