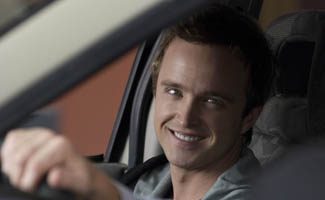 This week, New York magazine celebrates Aaron Paul in its TV issue while Bryan Cranston chats up The Huffington Post UK in lieu of the Season 3 DVD release abroad. Plus, Vince Gilligan sympathizes with British viewers who have trouble getting access to Breaking Bad. Read on for more:

• New York‘s TV issue profiles Aaron Paul and comments that “Jesse, the expendable, has become one of the most complex characters on the show.”

• Ahead of the Breaking Bad Season 3 DVD release in the U.K., Bryan Cranston tells The Huffington Post UK that Breaking Bad has “struck a chord because we dare to be dark.” In its review of the DVD, HeyUGuys says, “Breaking Bad has in no way lost its zing.”

• Vince Gilligan tells Digital Spy he feels the pain of U.K. viewers who can’t see Breaking Bad, saying, “It’s always a disappointment when I hear that we have a lot of fans in places that don’t regularly receive our show.”

• Excited for the upcoming season of Breaking Bad? You’re not alone! The DJs of Hood Internet showed up in Hazmat suits (along with Giancarlo Esposito) at a recent concert in Irving Plaza. Check out the footage from the event.

• TVLine reports that Jesse Plemons (formerly of Friday Night Lights) has been cast in a recurring Season 5 role.

• The Huffington Post spotlights an artist who imagines fictional families, like the Whites, in awkward, JCPenney-style family portraits.

• Wired notes that Walter White’s meth “might cause cavities” because the show uses rock candy as the drug’s stand-in.

• The Orange County Register lauds Breaking Bad for choosing to end “while still one of the handful of best dramas on TV.”

• The Toronto Sun includes Breaking Bad: The Complete Fourth Season (out June 5) in its list of top Blu-ray summer releases.

• One thing HitFix learned from watching the new clips for NBC’s Revolution: “Giancarlo Esposito is the steely-eyed enforcer .” The Los Angeles Times has a trailer for the show. NBC.com has a video of Esposito talking about the show. New York Magazine awards the drama “bonus points for putting Giancarlo Esposito on a horse.” Ology‘s one-word review: “Gus!”