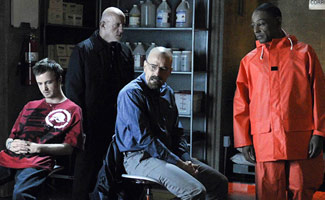 This week, Aaron Paul braces fans for the return of Breaking Bad  while the drama makes it to the semifinals of New York Magazine’s TV Drama tournament. Read on for more.

• The Los Angeles Times reports that Aaron Paul has taken to Twitter warning fans to “wear your diapers” for Breaking Bad‘s Season 5 Premiere.

• Breaking Bad makes it to the semifinals of New York Magazine‘s tournament of Greatest TV Drama of the Past 25 Years, eventually losing out to HBO’s The Sopranos.

• All Media NY, The Baltimore Sun, Chicago Tribune, The Calgary Herald, Digital Spy, and MSNBC eagerly await the premiere of Breaking Bad with the latter referring to the show’s return as “scream-worthy”.

• Gold Derby thinks Breaking Bad can “cook up” an Emmy win this year.

• Yahoo! TV names Breaking Bad the
most revolutionary of TV shows that “will continue to push the
boundaries… between TV and the movies.”

• The Hollywood Reporter highlights reflections of ABC’s Modern Family cast on working with Bryan Cranston as guest director of an upcoming episode.

• Cinema Blend features a Madagascar 3 trailer where Bryan Cranston will play the role of Vitaly the tiger.

• Arts & Leisure reports that a new film starring Bryan Cranston called Leave will be presented at a special screening.