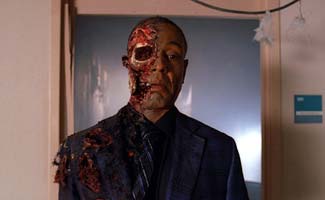 This week, Entertainment Weekly and The Hollywood Reporter place Breaking Bad at the top of their lists of the best TV shows of 2011. The series is also recognized on “best of” lists from the Associated Press, Salon, and TV Fanatic. Read on for more:

• EW also chose “Crawl Space” as a Favorite Episodes of 2011, lauding it because it “kept viewers in a vise grip of suspense.” (No Link.)

• Vince Gilligan talks Entertainment Weekly through Gus’ death scene, including the 19 takes he shot of Gus stepping out of the door: “Because it was a one-er and it had to be as close to perfection as possible, I wanted everything just the way I wanted it.”

• Breaking Bad ranks first on The Hollywood Reporter‘s list of the year’s best shows: “There are a lot of great series on this list, but if you’re on the top, then you’re arguably the best show on television.” (No Link.)

• NPR puts Breaking Bad at the head of its list of the year’s best scripted comedies and dramas.

• The show sits atop the Pittsburgh Post-Gazette‘s year-end list: “Breaking Bad is that rare TV series that has never made a seriously damaging storytelling misstep.”

• Breaking Bad is No. 4 on Salon‘s ranking of the year’s best, describing it as the “most engrossing drama on TV: mordantly funny, shockingly bloody, dazzling in its architecture, merciless in its execution.”

• The Associated Press called Breaking Bad an example of TV at its best in 2011, noting the show was “bleak, suspenseful, shocking and, at times, bitterly funny.”

• Digital Spy ranks Breaking Bad in its list of the year’s top 25 shows: “Another year, another epic season of Breaking Bad. The show can do no wrong at the moment.”

• The Niagara Falls Review puts Breaking Bad at the top of its ranking, remarking, “Fans have known for awhile this was the best show on TV, this was the season all doubt disappeared.”

• The Appleton (Wisc.) Post-Crescent considers Breaking Bad “the best drama on television, and if next year’s final season stays on course, it’ll be one of the best of all time.”

• Yidio pronounces Breaking Bad one of the five best this year: “every single episode of this season…was as engaging as a television show can be.” Yidio also thinks Giancarlo Esposito and Aaron Paul gave two of TV’s most monumental performances this year.

• According to Time, one of the year’s best lines was Walt’s “I am the one who knocks,” from Season 4, Episode 6, “Cornered.”

• TV Fanatic calls Gus Fring one of the year’s best villains: “both sympathetic and sinister, all business and all scary all the time.”

• Extra considers the “explosive” Season 4 finale one of the best TV moments this year.

• One of TV.com‘s favorite TV moments of 2011 was Gale’s karaoke video from “Bullet Points”: “Let the bizarro rip.” (Click here to watch the video.)

• The Erie Times-News asks what will become of Walter White next season: “Now that he’s disposed of Gus, the drug overlord who owned him, where will he go? Jail? Six feet under?”

• Los Angeles Confidential interviews Krysten Ritter, who says her role on Breaking Bad as Jesse’s girlfriend Jane “changed everything” for her.

• Entertainment Weekly highlights one of actress Mindy Kaling’s tweets from earlier this year: “So where is the community chat room called ‘Holy S–, Did You See Breaking Bad?!’ I’m there. I post in all caps.”

• Need a last minute Christmas gift idea? How about a pair of Converse Chuck Taylor All Star sneakers with a Breaking Bad (“Drug Runners”) design?