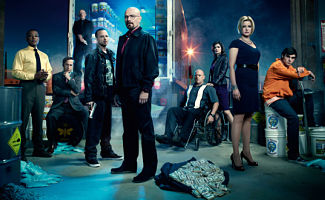 • Breaking Bad is No. 1 on Stephen King’s list of his 2011 pop culture favorites in Entertainment Weekly, declaring the show has “now surpassed The Sopranos” and “is an American classic.”

• The casts of AMC’s original series are featured in Entertainment Weekly‘s annual Entertainers of the Year issue (no link). Bryan Cranston and Aaron Paul represent the cast of Breaking Bad, with Cranston commenting on why Breaking Bad might not exist were it not for Mad Men‘s Jon Hamm.

• Variety reports that Dean Norris will star in the film Frozen Ground alongside Nicolas Cage and John Cusack.

• Back Stage chats with some of the show’s cast members including Bryan Cranston, Aaron Paul, Anna Gunn, Dean Norris, and Betsy Brandt.

• Breaking Bad and Bryan Cranston are up for Satellite Awards in the Television Series: Drama and Actor in a Series: Drama categories, respectively.

• The Huffington Post features a video interview with Bob Odenkirk from his appearance on IFC’s on-air edition of the popular radio show Comedy Death-Ray.

• Deadline Hollywood highlights the different Producers Guild and Writers Guild eligibility windows to explain why it seems like a “baffling omission” that Breaking Bad garnered no PGA nominations this year.

• Entertainment Weekly notes that Smashed, starring Aaron Paul, will be screened at the Sundance Film Festival next month.

• The Examiner has photos of Aaron Paul at the premiere of “Michael Jackson THE IMMORTAL World Tour” in Las Vegas.

• In a case of life imitating art, The Hollywood Reporter has the story of a college professor who has been accused of operating a meth lab in her home with some help from her son.