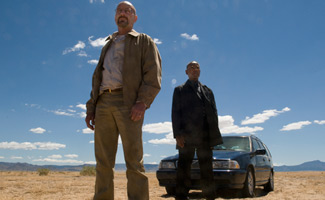 This week, Vince Gilligan tells Today.com that he has no idea how the show is going to wrap up, the Los Angeles Times forecasts Golden Globe nominations for both Breaking Bad and Bryan Cranston, and GoldDerby handicaps Bryan Cranston and Aaron Paul’s chances of nabbing SAG Award nominations. Plus, numerous publications give thanks for Breaking Bad, and HitFix names Giancarlo Esposito one of the year’s 25 breakout stars. Read on for more:

• Vince Gilligan tells Today.com that he has no idea how the show is going to wrap up: “I have certain hopes and dreams for how the characters will wind up, but I don’t have anything nailed down plot-wise.”

• The Los Angeles Times predicts that Breaking Bad and Bryan Cranston will be nominated for Golden Globe Awards (no link). They also offer some possible reasons why Breaking Bad has only garnered a single Golden Globe nomination to date, and include Bryan Cranston in a look at actors who excel at both comedy and drama, noting that being good at both has “traditionally been next to impossible when it has come to television.”

• HitFix names Giancarlo Esposito one of the year’s 25 breakout stars, saying “Esposito’s work is going to be long, long remembered by anyone who watched one of the small screen’s best villains ever.” Esposito’s local paper, Arts & Leisure, notes that his portrayal of Gus Fring “has raised Mr. Esposito’s profile practically overnight.”

• Aaron Paul talks to Australia’s AdelaideNow about the show and its impending ending, saying “It’s going to be very sad to say goodbye to this show.”

• Screen Junkies includes Breaking Bad on its list of “5 AMC Shows That Are Better Than All Other Television Combined,” noting, “Plain and simple a must watch for anyone who watches TV, or really anyone who ever might watch TV.”

• Breaking Bad is OnMilwaukee.com‘s 2011 TV pick: “This show gets darker and better each season.”

• The International Business Times includes Breaking Bad (and The Walking Dead) on its list of the year’s top 10 TV shows.

• Australia’s Melbourne Weekly spotlights Breaking Bad, calling it “as close to perfect television as you can find.”

• Forbes wonders why all TV anti-heroes are men, finding themselves unable to think of any female anti-heroes on TV “in the same ballpark as the leads in Breaking Bad.”

• The New York Times reviews Alan Alda’s Radiance, saying Marie Curie is “gracefully portrayed” by Anna Gunn., while The Los Angeles Times reports that Bryan Cranston has joined the cast of a stage production of It’s a Wonderful Life that will run for two performances only on Dec. 10 in Los Angeles.

• BuzzFocus highlights the show’s encore run, which will begin airing on Dec. 5: “This is a good time to set your DVRs up so that you don’t miss out on any of the fun (or carnage).”

• According to TVOvermind, Bryan Cranston will appear in an episode of The Mortified Sessions on the Sundance Channel.

• TV Guide reports that Giancarlo Esposito’s character will return to ABC’s Once Upon a Time in the new year, with details about “who he is, who he was and how he got in the mirror.”

• According to AOL TV, Mark Margolis will guest-star on the Dec. 8 episode of Person of Interest on CBS.

• The Hollywood Reporter shared WWE star Chris Jericho’s tweet about The Walking Dead‘s midseason finale in which he also expressed his love for Breaking Bad: “Walking Dead and Dexter were amazing tonight! What a swerve in both episodes. Throw in Breaking Bad and you’ve got the 3 best shows on TV.”