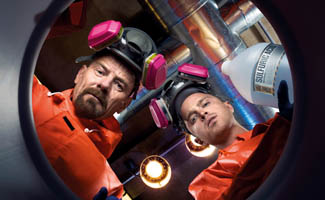 This week, Forbes calls Breaking Bad “the best show on television,” while GQ declares the series the “best ensemble show on TV.” Plus, The Hollywood Reporter looks at the show’s Golden Globe potential, New York compares Breaking Bad with Breaking Dawn, and Television Without Pity suggests the drama should feature a Christmas episode next season. Read on for more:

• Forbes provides six reasons why Breaking Bad is the best show on television, noting that the series “takes television to an entirely different level.”

• New York compares Breaking Bad with Breaking Dawn, noting “the astonishingly accomplished and fascinating TV show has more in common with the wildly popular vampire series than you might expect.”

• Television Without Pity wants Vince Gilligan to write a Christmas-themed episode, suggesting, “Jesse could be visited by Jane, incarnated as the Ghost of Christmas Past, while Saul could display a cheesy light-up menorah in his office and Mike could spend quality time showering his adorable granddaughter with gifts before killing another army of thugs.”

• The New York Post notes that Dean Norris’ appearance on a recent episode of CBS’s The Mentalist marks the third time he’s played a law-enforcement type since the Breaking Bad Season 4 finale that “transformed him into the most clever and tenacious DEA agent ever.” BuddyTV jokes the show’s case of the week was “so tantalizing that Agent Hank Schrader is called in from Albuquerque to help solve [it].”

• Israel’s Haaretz reports that Giancarlo Esposito joined a group of actors who went to the Middle East to learn more about the conflict there; the article includes a photo of Esposito with President Shimon Peres.