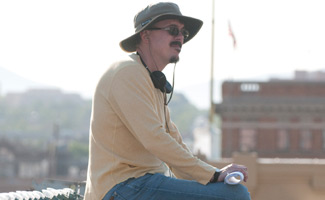 In Part 2 of a three-part interview with Breaking Bad series creator Vince Gilligan based on fan questions, Vince talks about Tio’s taste in movies, how the producers find locations in Albuquerque, and the mindset of a showrunner.

Q: Since nothing ever seems to be wasted on your exceptional show, is there significance in the fact that Tio is watching Bridge On the River Kwai when Gustavo visits? — Sandra

Q: How do you choose locations for the show? Do you drive around looking for places? Have you ever written a scene because you found a cool location? — Lisa Shock.

A: We have a location manager named Christian Diaz de Bedoya whose job it is to find the locations in and around Albuquerque. It’s definitely a full-time job and he and his staff work very hard to find these locations. At the beginning of the season they also go out and photograph places that they think are visually interesting. Typically we’ll have a meeting at the beginning in which they show us these photographs, and discuss them. Very often we’ll get inspired by these possibilities location-wise and we will indeed write to certain places that they find for us.

Q: You incorporate a number of different directors over the course of a season and indeed throughout the series. Is the choice of director for each episode done arbitrarily or deliberately? — wavy

A: In a perfect world we would be able to match the particular strengths of the director to a particular episode that would benefit from the application of those strengths. However in practice that’s not typically the case: we have to book the directors months before we have the individual episodes written or even mapped out. It’s a bit of a crapshoot. Sometimes we’re teaming a director who is perhaps strongest working with actors for instance or with an episode that’s very visually intense and less actor-intense, or vice-versa. Having said that, I think we have the best directors in all of television and they’re all four or five-tool players.

I directed episodes 412 and 413 and we did something called block shooting so that I could direct both of them at one time. The reason I did the last two instead of a couple episodes in the middle or the beginning is because I’m busy in the writer’s room for the bulk of the season, and the only chance I would ever have to direct one once the season gets going is the last episode, when all the writing is done. I did the last episode of Season 3 for the same reason.

Q: As a fellow resident of Chesterfield, I have to say I couldn’t be more proud of what you’ve accomplished, and don’t think your references in the show to Virginia have gone unnoticed! I wanted to ask you how much do you contribute to the story of Breaking Bad? — William Carino

A: Well I run the writers room, which I liken to being on a sequestered jury that never ends, because what it entails is a bunch of people sitting around and arguing constantly. We basically sit around this table and ask our selves the same few questions day in and day out. Where is Walt’s head at? What is he afraid of right now? What does Jesse want? In finding the answers to these questions we create the plots for each episode, and I’m always there in the room. Only at the point when each individual episode is completely figured out does an individual writer go off and write it into script format. Primarily they’re creating the dialogue that you hear. Once they have created a finished script, they give it to me and I read it and I give them notes.

I have very good writers who are very adept at finding the voices of characters, and with every season that we shoot I typically have fewer and fewer notes for each individual writer. Anyone who is a showrunner on a TV show is a control freak to a certain extent, but the truth is you have to allow other people into your creative process, you’d be a fool not to. One big thing that needs to feel continuous from episode to episode are the voices of the characters. Saul has to sound like Saul, Skyler has to sound like Skyler. And that’s the big thing on my part, giving some guidance to the writers to make sure our characters sound like our characters.