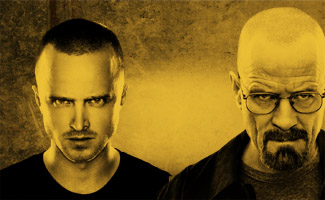 Breaking Bad, which premiered its Season 4 Finale last night, ranks as the most engaging series on television according to Nielsen’s IAG, which measures program engagement and ad effectiveness.

“Bad is so good. Thank you Vince Gilligan; what a season and what a finale.  Few entertainment experiences move audiences the way Breaking Bad does, consistently. The audience growth from season three to season four is unprecedented for any drama in basic cable history and now it has been named the most engaging program across all of television by Nielsen. We can’t wait to share with fans what’s next in the White house,” said Charlie Collier, AMC’s president.

Over four seasons, Breaking Bad has been heralded as one of the best TV dramas on television. New York Magazine said, “There’s no other show like it.”  Newsweek said, “Breaking Bad is as addictive as the meth cooked by its cancer-stricken lead character, and just as insidious. It’s also TV’s finest hour.”  People said, “The show has evolved into a modern underworld Western – there’s nothing else like it.”  Variety said, “Either appropriately or ironically for a show about meth cookers, Bad is simply one of TV’s great addictions.”

The series first premiered on AMC in January 2008 and follows protagonist Walter White, a milquetoast high school chemistry teacher who lives in New Mexico with his wife, teenage son who has cerebral palsy and a new baby girl. White is diagnosed with Stage III cancer and given a prognosis of two years left to live. With a new sense of fearlessness based on his medical prognosis, and a desire to gain financial security for his family, White chooses to enter a dangerous world of drugs and crime and ascends to power in this world. The series explores how a fatal diagnosis such as White’s releases a typical man from the daily concerns and constraints of normal society and follows his transformation from mild-mannered family man to a kingpin of the drug trade.