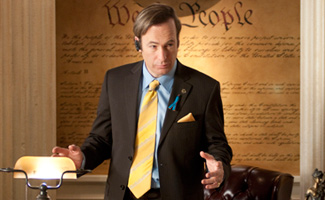 Bob Odenkirk plays Walt’s shady attorney Saul Goodman on Breaking Bad. In an exclusive interview with AMCtv.com, the actor/comedian talks about his love of infomercials, his favorite Saul line of the season, and his fear of the Breaking Bad writers.

Q: You’ve done a lot of fake infomercials in the past, including for Breaking Bad. Are you a connoisseur?

A: I am not a connoisseur of crappy late-night infomercials, but I do love them. I feel like they’re ripe for comedy because they’re full of pathetic human behavior and con-jobs. I like the modern ones, the gadgets and things that are fixing problems that you don’t actually have. “Are you sick and tired of something easy to do?” [Laughs] “Well, we have a slightly easier way…”

Q: [Laughs] Do you have a favorite infomercial?

A: There was a guy in Chicago where I grew up called Harry Schmerler, the singing Ford man. He’d sing a little snippet of a golden oldie song, and then he’d tell you about his used cars that were for sale and photographed in not the most attractive light. That popped right into my head when you asked me that. The favorite late-night infomercial that I’ve done was on Mr. Show, it was a guy who was just advertising to come over to your house and hang out. You think he’s a lawyer — “I’m not a lawyer!” His name is Don Pratt. It’s just a fun, great idea. The guy, what is he offering? What is for sale there?

A: I watched Episode 4 last night, the one where Walter White says, “My brother-in-law is going to come after me,” and I go, “Come after you in what, his Little Rascal?” That was a great one. It’s so mean and unnecessary, but Saul can’t help himself. I like how unrelenting Saul can be. He doesn’t take no for an answer, at least the first four times.

Q: Do you think the average citizen has anything to learn from Saul?

A: I think everything’s a negotiation with Saul. A naïve way of looking at the world is that there are these rules in place and we have to follow them, but the truth is that everyone is constantly negotiating what they’re doing and why and how much they’re getting paid for it. I think that’s something you can learn from him.

Q: You’ve done a fair amount of writing and directing for various television shows, including SNL. Have you ever given the Breaking Bad writers any input?

A: You know, I go to the writer’s room every year and hang out and I do not attempt to tell them how to do their job. Because what they do — even though I’ve done a lot of writing — is a mystery to me, and a mystery I’m a little bit afraid of. I go in their room and the walls are covered in little cryptic notes about the whole season and what characters are going to do. So much thinking has gone into it, and I have so much respect and fear of it. The cool thing about this role is that it is another level of writing. I do what they write for me, and I don’t improvise — I don’t need to. I’d sure like to take credit for some of it, but I can’t.

Q: RJ Mitte was asked in an interview if there was a character from the show that he would like to have a scene with. He said Saul Goodman.

A: Oh my god, that is like putting a scorpion in a cage with a baby chicken. That is so sad. [Laughs]

A: Oh man. He’s such an innocent. He’s so naïve, he’s so earnest, his heart’s on his sleeve the whole time, and then you put him in a room with Saul Goodman, who is nothing but layers of greed and ego. [Laughs] I think I know who wins in that cage match. I think I know who climbs out: Saul.