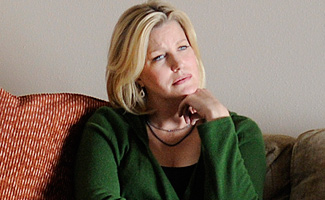 Actress Anna Gunn plays Skyler White on Breaking Bad. In an exclusive interview with AMCtv.com, she talks about how she learned to deal cards for Season 4, which cast member she’d love to have more scenes with, and why she hasn’t let her kids watch her on the show.

Q: The show is really generating some buzz this year.

A: We had the premiere a couple weeks ago, and when we got dropped off at the loading dock outside the Mann Chinese Theater the fan base was so much bigger and greater than for any year before.

Q: Tell me a little bit about the scene from Episode 4 where Walt and Skyler are rehearsing the story they’re going to tell to Hank and Marie. You showed some dexterity with a deck of cards. Do you have a history as a casino shark?

A: I’m not a gambler, let’s just say that, nor have I ever been a dealer at a casino. They brought in a women from one of the casinos in Albuquerque to show me the ropes. When she first showed me how she dealt, I was thinking my hands do not work that fast! There were a few tweaks we had to make in terms of what came up in the cards, and the dealer had to set the cards for me so I would come out with a certain hand each time. And then of course everyone on set wanted to go gambling with me. When I told them that I wouldn’t know what I was doing, they were like, that’s precisely why we want to gamble with you.

Q: Skyler’s recently had some memorable moments with Saul Goodman. What other character that you don’t normally interact with would you like to have a scene with?

A: It’s funny: Aaron and I have only had, I think, one scene together in the show so far, back in the innocent days of Season 1 when Skyler thought he was selling pot to Walt. She’s still totally unaware of who Jesse has become to Walt.

Q: Skyler is slowly becoming the willing wife of a criminal this season. Did you have any idea that this is where your character would end up?

A: Vince told me early on that he had this idea of her as kind of a Carmela Soprano; he had a plan for Skyler eventually being involved in some way in the crime. For me that sold it, even though I had no idea how that was going to come about or when or what it would look like.

Q: There’s that great scene in Episode 3 this season where you feed a fake inspector lines of legal jargon about proper waste water disposal at the car wash. Did you understand what you were saying?

A: It was scripted for sure. The writers are so brilliant — they do all this research impeccably. It’s like when you’re playing a doctor or lawyer: you have to sound very at ease with all that jargon. It becomes a lot about just drilling those lines until they’re second nature. When I was feeding the guy all that stuff, I had books all over the car that props had put the lines into, so I could read the right lines.

Q: Who is the baby actress that plays Holly? Is there more than one?

A: Yes, oh my god, we have tons of babies! Babies can only work for very short periods of time on the set, so on any given day we might have two to three to four babies depending on the length of the scene and how much time it might take to shoot. And they’re all so cute and lovely. I’m always kind of amazed at them.

Q: Have you ever watched any episodes with your children?

A: Oh my gosh no! They’re four and ten-years-old, so they’re not quite ready for that. And of course the ten-year-old is asking me why she can’t watch it. She does get to come when we’re filming some scenes here and there that are OK for her to watch. But I don’t really know how to explain heads on tortoises to her yet.

Click here to read an interview with Christopher Cousins, who plays Ted Beneke