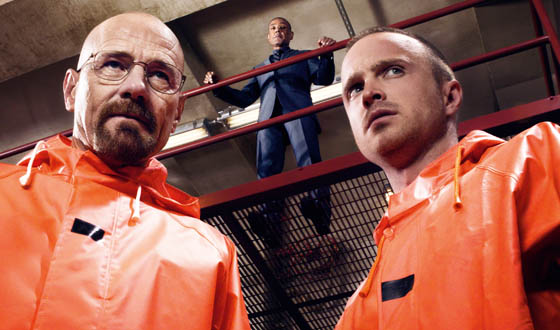 Breaking Bad Season 4 is also complemented by a variety of exclusive material on www.amc.com. Among the special digital content is “Inside Breaking Bad” videos for each episode, behind-the-scenes clips throughout the season, and videos of the season’s most “Talked About Scenes.” The site also features a new iteration of its interactive graphic novel, starring Aaron Paul’s character Jesse Pinkman, and an interactive case file — with photos, text and video that allows visitors to sift through the same crime scene evidence that DEA agent Hank Schrader (Dean Norris) is privy to. The game is entitled “The Cost of Doing Business” and is written by Breaking Bad writer’s assistant Gordon L. Smith with art from Steve Ellis (The Interrogation, Iron Man, High Moon) and game design by Playmatics, Inc.

Season 4 is already garnering praise. New York Magazine states, “There’s no other show like it.” Newsweek calls it, “TV’s finest hour.” People gave it “4 Stars” and tvline.com said, “The ‘Masterful, Intense, Crazy-Good’ Season 4 Is ‘Worth the Wait.” Star calls it, “one of the best shows on TV.”

Breaking Bad has garnered a Peabody Award (2008), a Writer’s Guild Award for Vince Gilligan’s work on the pilot episode, two American Cinema Editors (ACE) Awards, and been named to the American Film Institute’s (AFI) list of the “Top 10 Programs of the Year” (2008, 2010).

Breaking Bad is produced by High Bridge and Gran Via Productions in association with Sony Pictures Television for AMC.