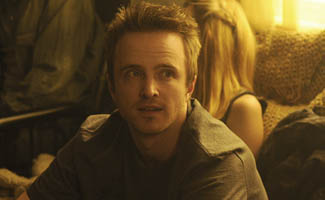 Emmy-winner Aaron Paul talks about what he misses most about Jesse’s hip-hop wardrobe, the item from the RV he’ll carry with him forever and which Breaking Bad villain he’d most want to play.

Q: What’s it like playing a character who constantly seems like he’s on the verge of a mental breakdown?

A: Thankfully I’ve never had to feel a lot of these emotions personally. Some days I definitely take it home with me a little bit, but if I lived and breathed Jesse 24/7 I think it would just be too much for me to handle. Although it is a lot of fun to zip on this skin that used to be completely foreign to me; now I have such a deep connection to Jesse Pinkman. I feel like he is in some ways a part of me.

Q: You checked yourself into an actual rehab to get in character for Season 3. Did you go to any similar measures to prepare for the intensity of Season 4?

A: I did look online for people on trial to see where they were at emotionally and try to get a glimmer of where Jesse would be at, but it was almost impossible to prepare for where his head is in the beginning of Season 4. He just murdered someone.

Q: Jesse started off the series wearing baggy jeans and hoodie sweatshirts, but as the story has gotten more intense so has his wardrobe. Which outfits do you prefer?

A: Oh man! I miss Jesse’s old style. It was so funny to go into the trailer and put on those ginormous pants. It felt like I was fully putting on costume for a character. But I do feel a little more comfortable in [Season 4’s] clothing.

Q: Did you keep any of the old outfit as a memento?

A: I didn’t, but I’m definitely going to grab something at the end of this series. When we crushed the RV, it felt like losing a character on the show. I dug through the rubble and grabbed the key ignition — this very small, metal piece you stick the key into in the RV — so I have that.

Q: Tell me a little bit about filming the party scene. How did it compare to the longest party you’ve ever been to?

A: I think I’ve maybe walked into a couple house parties where it seemed like that, and I’m like “You know what? These people are out of their minds and I need to get as far away from this place as possible.” Jesse, Skinny Pete and Badger go through their phases as full-blown meth heads, so their idea of partying and having a good time is much different than mine. I mean, I like to dance around and have a good time, but it’s a little different with Jesse.

Q: One of the first things Jesse purchases for his house is that huge sound system. What would be your first purchase?

A: When I went to Albuquerque to shoot the first season, I found my place online. As I’m pulling up, I realize it’s right next to a cemetery. So the first thing I have is a computer and some speakers so I can plug it in and listen to music. But when I walk back out, I notice that there is a funeral right on the other side of the fence and my music is blasting. So I run back inside and completely turn off my music. I only actually ended up staying there for a couple of weeks. So getting hooked up with music first thing is definitely key, but when you have to consider the volume of your music, it’s never a good thing.

Q: If you had to drive one car for the rest of your life, would you choose Jesse’s Season 1 Monte Carlo, the RV, Walt’s Aztec or Jesse’s Tercel?

A: That’s a hard question to answer! Not the RV, because that thing is horrible to drive. It’s just so big and you’re all over the place on the freeway with wind. I think I’d have to choose the Tercel — there’s something special about it and it will run forever.

Q: What if you had to be cast as one of Breaking Bad‘s villains. Who would you want to play?

A: I don’t know if I relate to him at all, but I think it would be Gus. Although I’d be terrified to be cast in that role because of what he’s done, I think it’d be a lot of fun to play Gus.