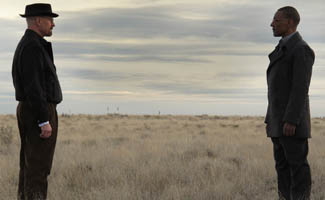 This week HitFix reports that Bryan Cranston will be the villain in the Total Recall remake and the New York Post talks up Breaking Bad ahead of the Season 3 DVD release in June.

• Bryan Cranston confirms to HitFix that he’ll play the villain in the Len Wiseman-directed remake of Total Recall. The Hollywood Reporter first had news of the negotiations.

• The New York Post touts the release of the Breaking Bad Season 3 DVD/Blu-ray set on June 7, calling the series “the best show on TV, in my opinion.” So does BroadwayWorld.com, which says, “Viewers can relive the darkest and most dangerous season yet.”

• New York Magazine likes Bryan Cranston in The Lincoln Lawyer, noting he “adds all kind of layers to the role of a hostile detective.”

• An article in the Las Vegas Review-Journal about Nevada trying to attract more TV productions mentions Breaking Bad as an example of how well New Mexico has done in that arena.

• Entertainment Weekly reports that AMC is developing a new drama, The Voyage, from Breaking Bad writer John Shiban that may be picked up for a pilot.