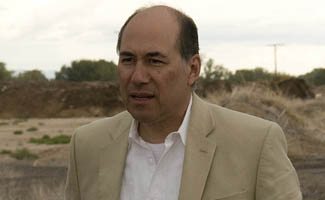 The actor describes playing his first villain ever on Breaking Bad, hints at Juan Bolsa’s legitimate background and explains how being strangled by Bryan Cranston led them to becoming lifelong friends.

Q: You often play cops and judges. Was Juan your first bad guy?

A: He was. When I was at the audition there were other actors I’ve known for years and they were more the type, what you would think of as an underboss or a cartel boss. So I thought this is a little bit of a coup for me. Michelle MacLaren, who directed the first episode, kept saying, “You have the power. You don’t need to do hardly anything.” And she was right. We did a few takes where I was a bit more bombastic, a little bit bigger and as Vince put it, he said, “You were really great because there wasn’t a lot of mustache twirling in your character.” I was very flattered. He even said, “I think we might have gotten rid of you too early.” So, who knows? You don’t see the bullets really go in my body. That’s what I kept telling them.

Q: Or he could come back from the dead via a flashback. What would you like to learn about his past if he were to appear in a flashback in a future episode?

A: It would be interesting to see what he did before because when I auditioned for the role the description said he was probably a bureaucrat at some point. So he wields the power but he kind of got sucked into it. He might have been the mayor of a town or a legitimate businessman who was made an offer he couldn’t refuse.

Q: What part of being on Breaking Bad was the most fun for you?

A: Playing with Danny [Trejo]. I remember seeing the episode where his head is floating on the tortoise and it blows up, and to be responsible for that was really cool. He was actually working on Machete while we were shooting that scene so he was in and out, and he even had time to sign autographs. People gravitated to Danny, asking him stuff. He loved it. He was taking pictures with people. [Laughs] It was pretty cool. And of course being a fan of the show and knowing Bryan [Cranston] for all these years.

Q: How do you know Bryan Cranston?

A: We used to be roommates.

A: No. No. We used to be roommates, way back when we were first starting out, and then he got married and I didn’t have a roommate anymore. We used to do comedy classes together and stuff. We met doing a TV show called Cover Up. He was guest starring as the villain and I was the detective investigating this serial killer, and he killed me. He strangled me with a rope and the rest is geography.

Q: And now you’re both in the upcoming film The Lincoln Lawyer.

A: Yeah, but I didn’t even know Bryan was in it until we were talking on the phone about something else, wine or something, and he was asking me, “What have you been up to?” I was in the first five minutes and his character comes in later. I have a scene with Matthew McConaughey in court. I’m the bailiff that he has to deal with. It’s a funny little scene.

Q: You started out doing guest spots on all classic ’80s shows. What do you think Breaking Bad would be like if it had been made in the ’80s?

A: Oh man. If Vince had been around and presented this to the networks they would have gone, “Are you crazy?” It probably would have been really whitewashed. When they melt the guy in acid, that wouldn’t have happened. The A-Team would never have done that. It would have been: Boom. Let’s get the bad guy. Let’s put him in jail. Okay, what are we doing next week? [Laughs]

Q: When in your own life do you get to be the boss?

A: I was part of a comedy sketch group and it sounds like small potatoes, but there’s a comedy theater in L.A. and they would actually get celebrities to come and host a show. It was like Saturday Night Live but live on stage. So Bryan did a show and it was great: Bryan asking me, “What do you want me to do with this character? Is this enough?” and I was telling him, “Well, you gotta do this.” That was very fulfilling.