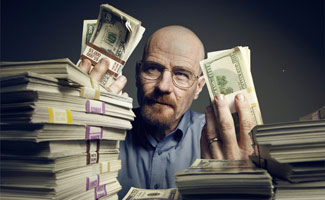 Although the Season 2 encores have just begun, Breaking Bad commenters were wondering this week about just how much money Walt has earned while in Gus’s employ.

• “I don’t see how it could be determined without knowing if Jesse knows what Walt’s making, and how Walt is now splitting with Jesse. That’s assuming the deal with Gus is, Walt’s responsible for paying Jesse (I assume Gale was getting paid separately by Gus).” — heisenberg jr.