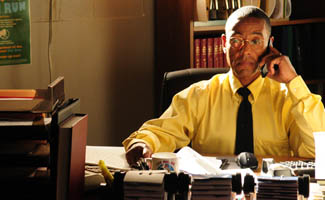 • The Hollywood Reporter, the New York Daily News and the Pittsburgh Post-Gazette reported this week that production on Breaking Bad Season 4 has commenced.

• It’s awards season and Giancarlo Esposito has been honored with an NAACP Image Award nomination for outstanding supporting actor in a drama series for his role on Breaking Bad.

• Breaking Bad‘s interactive graphic novel game, “The Interrogation,” received a nomination for a CableFAX Best of the Web award in the contest/online games category.

• Andre Braugher tells TV Guide that Aaron Paul is the reason he’ll never win an Emmy for his role on Men of a Certain Age: “Aaron Paul is dynamite on Breaking Bad. Bigger things happen on that show.”

• The New York Observer highlights Bryan Cranston’s new web series, The Handlers, and has video of the second episode.

• You can catch Dean Norris on the Jan. 19 episode of The Defenders, according to Mega Buzz.