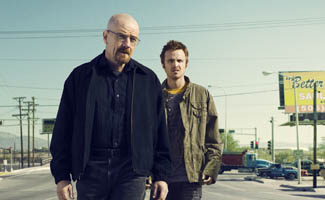 The kudos keep coming, with appearances this week for Breaking Bad on several publications’ year-end lists, while Bryan Cranston chats with Collider.com and TV Guide reports that Aaron Paul will return for the Big Love series finale.

• The Boston Globe includes Breaking Bad on its list of TV’s top shows this year: “Everything about this show is top-notch, from the acting and writing to the spectacular cinematography (by Michael Slovis) that frames each shot precisely and artfully.” Breaking Bad also appears on Gawker‘s favorite TV of 2010 list: “A true crime show that also manages to be a spectacularly moving and terribly believable human drama.”

• Newsday, the St. Petersburg Times and the St. Louis Post-Dispatch all rank Breaking Bad at No. 2 on their lists of the year’s best TV. The Fort Worth Star-Telegram puts it in third place, while the Pittsburgh Post-Gazette places it at No. 6.

• TV Guide reports that Aaron Paul will return to Big Love for the Series Finale in March.

• LAist includes interviews with Bob Odenkirk and Betsy Brandt in a list of its top 10 interviews of the year, complimenting Odenkirk as “fantastic” on Breaking Bad and Brandt as a “great actor who is also an incredibly nice person.”