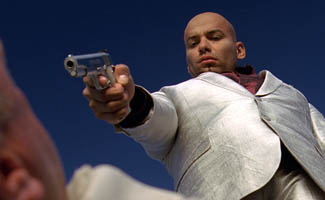 • Entertainment Weekly places Breaking Bad at No. 1 on its top 10 list, citing how the drama is “forever grappling with questions of morality and mortality, but not in the usual manner.”

• At No. 2 on Movieline‘s list of the year’s top TV episodes is Season 3 Episode 7 (“One Minute”), which “saw enough unexpected gunfire and supercharged betrayal to fuel our nightmares for years.”

• TV Guide‘s top 10 saw AMC at No. 6, complimenting the network for Breaking Bad‘s “unsparingly suspenseful third season of moral contamination” and citing Episode 7 as “the most gripping episode of anything I saw all season.”

• Aaron Paul lands at No. 57 on USA Today‘s list of 100 People of 2010, lauding the actor for his “multi-layered performance on Breaking Bad.”

• Bryan Cranston tells the Los Angeles Times that his Golden Globe nomination “will hopefully open up a more global spyglass for the show.” In the same vein, USA Today quotes Cranston saying that maybe the nomination “means that internationally audiences will have an opportunity to take a look at our show and hook on to (its) addictive quality.” He also tells Entertainment Weekly regarding his nomination, he’s “thrilled on many different levels.”

• Variety had Bryan Cranston’s reaction to the early-morning phone calls alerting him to award nominations: “You think no one ever calls at that hour unless it’s bad news. I know that in the future when I get a phone call to tell me someone’s died, I’m going to answer it like, ‘Really? I was nominated?'”

• The Wrap writes about AMC giving creative freedom to its show-runners, and quotes Vince Gilligan crediting the network for being able “to tell the type of stories I’ve never been allowed to tell elsewhere.”

• At Rabbit Hole‘s New York premiere, Giancarlo Esposito relates an anecdote to New York Magazine about saving Nicole Kidman from a paparazzo: “That was my Academy Award performance!”