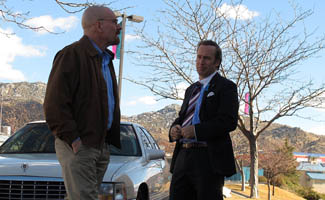 The Boston Globe calls Breaking Bad‘s second season a “revelation,” while Salon cites Breaking Bad as an example of what’s turning AMC into the new HBO.

• The Boston Globe encourages a newbie to stick with Breaking Bad: “Wait until Season 2. It’s a revelation. The first few episodes are magical.”

• Salon points to Breaking Bad in an article about the rise of AMC, explaining the cable network “isn’t the new HBO just yet. But it’s getting there… Each season of an AMC series really does feel like a novel.”

• More on Bryan Cranston at GQ‘s Man of the Year party from the Wall Street Journal: “My daughter picked out everything I’m wearing tonight. Everything but the underwear.”

• IGN compares Dexter’s sister Deb on Dexter to Hank: “Sometimes Deb’s great detective is hella frustrating. In a good ‘creates suspense’ kind of way, of course. Like Hank over on Breaking Bad.”

• Murder She Wrote: The Complete Twelfth Season DVD is out — and you’ll find Bryan Cranston as a guest star.