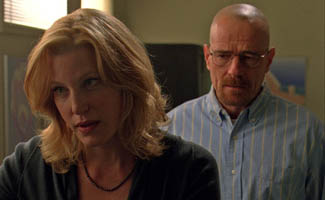 – CableFAX has named Breaking Bad and Bryan Cranston as finalists for its annual awards honoring cable TV’s top shows. The awards will be presented Oct. 4 in New York City.

– Entertainment Weekly reports that Anna Gunn, “who recently picked up Most Egregious Emmy Snub honors for her superb Bad work,” will guest-star on Fox’s Lie to Me this fall.

– Vince Gilligan shares with DeadlineHollywood.com that he’s “thankful for the invention of bourbon” to help allay his “neurotic fear of failing.”

– In an interview with The Celebrity Cafe, Betsy Brandt says, “I cannot. I will not,” wear purple when she’s not working.