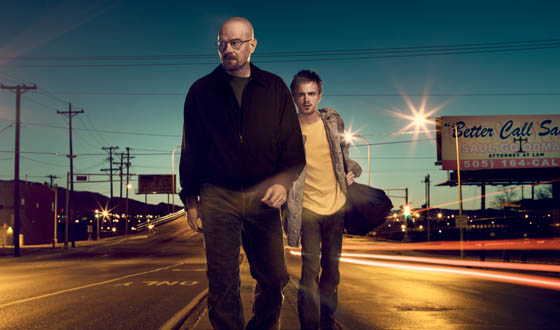 Are you entering Breaking Bad withdrawal? Fear not: The Season 3 encores are just around the corner. (Start date? Sun., Jul. 25 at midnight | 11C). While you wait, relive some of the excitement with AMCtv.com’s Season 3 cast interviews.

•”I always felt that Walt was older than his age, and I think that comes through — that he feels older and wearied, even at 50.” — Bryan Cranston (Walter White)

•”Jesse is completely different than me. But I definitely have been saying ‘Yo’ a lot more… I think it’s going to be a part of me forever.” — Aaron Paul (Jesse Pinkman)

•”I think the way.. she sort of really stumbles onto the truth is pretty fantastic.” — Anna Gunn (Skyler White)

•”Walter, Jr. would be happy with any car he could get. It would be freedom. It’s something that everyone goes through. It’s his first car!” — RJ Mitte (Walter White, Jr.)

• “My four-and-a- half-year-old is really funny because we reenact the Tuco shootout from ‘Grilled’ on a regular basis and he plays Tuco.” — Dean Norris (Hank Schrader)

•”I’ll get into a fake fight with anybody. The key word there is fake. Real fight, I don’t think I would want to take on Bryan Cranston.” — Bob Odenkirk (Saul Goodman)

• “Walter immediately assumed [he and Gus] were very much alike. But the way he cuts the peanut butter sandwich — I don’t think Gus is that far gone.” — Giancarlo Esposito (Gus Fring)

• “Mike has that great sense of irony, of ‘How much more foolish or silly can it get?'” — Jonathan Banks (Mike)

• “What’s cool about Gomez this season is that he was always sort of the quiet one, playing off of Hank. And now they put more depth into him.” — Steven Michael Quezada (Gomez)

• “I went on the audition… and I was thinking, ‘I hope there’s someone that looks like me…’ It never crossed my mind about [my brother] because he never worked. ” — Luis Moncada (The Cousin)

• “I was really nervous. I’m not going to say no… After the explosion, I was more comfortable.” — Daniel Moncada (The Cousin)

• “I grew up with the biggest known gang bangers living right next door to me.” — Emily Rios (Andrea)