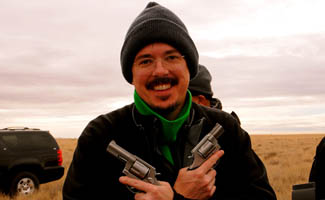 Is there some metaphor or symbolism I’m missing with the frequency of Walt’s windshield breaking? — Warrior Pooflinger

Vince: [Laughs] That is not something we set out to do. But we found to our own surprise that Walt’s windshield seemed to get broken an awful lot. We thought early on that any guy that drives that crappy a car is also someone who’s not going to bother to take the blue tape off after the guy comes over to repair the windshield. So it started with the delight that we got from the fact that Walt is too tuned out to even take the blue tape off, and then after the first windshield breaking we had it happen again. And by the third time or so — I’ve truly lost track of how many times Walt has had his windshield broken — it just kind of reached a point of critical mass. [Laughs] It’s probably time in general for Walt to get a new car, especially now that his car is a murder weapon.

Can you explain the use of the color blue this season: The blue meth, the tape on Walt’s windshield, the blue ribbons from the flight disaster, Walt’s shirts, etc. — Ian

Vince: We spend a lot of time thinking about our color palette. I don’t know that there’s necessarily a deeper symbolism to the color, but Ian is definitely right that Walt in particular wore blue this season, whereas in the past two seasons I don’t know that he’s ever worn that color. And the blue that Walt wears in Season 3 in my mind is a subtle indication of Walt moving towards Skyler. And Skyler meanwhile is moving away from Walt in the sense that this season she’s started to move away from her typical color palette of blues into darker blacks and into some greens.

Vince: I think, sadly, both soft spots can lead to some dangerous moments. I think that it’s a shame that in this world of Breaking Bad, loyalty and a so-called “soft spot” that one character feels toward another could wind up having dangerous consequences. And I guess it remains to be seen which soft spot leads to the bigger problems for that particular character. But I would say Gus in general is probably a colder, harder-edged character than Walt. And I can’t imagine Gus’s affection for Walt is still very much in tact. He’s not going to make that same mistake twice of relaxing around Walt. That’s why I’m a little nervous going forward as to how we’re going to pay some of this stuff off. [Laughs] We’ve got some big drama at the end of Season 3, and it’s going to lead, I imagine, to bigger drama in Season 4. But I’m also a little nervous about getting Walt out of the mud.

Vince: Walt’s cancer did kind of take a back seat this season, which does not mean that it won’t resurface at some point. Walt, in my mind, does indeed have cancer. And it is in remission right now, but remission, it should be noted, does not necessarily mean a total cure. We probably have not seen the last of Walt’s cancer. But his current state of relative health is kind of an irony in itself. He got off on this whole tangent of becoming a criminal due to his realization that he didn’t have long to live. And as we saw towards the end of Season 2, when Walt suddenly got some good news, he didn’t quite know how to react. He had felt bitter and betrayed by his own body, and said “The Hell with it. I’m going to be a meth cook.” And now he may live for years to come and in the meantime he’s sold his soul and become a bad guy. That is one of those ironies we love as writers.

I noticed on the Inside Season 3 videos a chicken costume in the background during your commentaries. Do you wear it often and if so why? — cow house

VG: [Laughs] Cow house, I love your name. Yes I am often dressed in the chicken costume, and I actually wanted to wear it for that interview but they wouldn’t let me. No. In fact, I didn’t realize it was back there. That was a fun bit of set dressing that our set designers put into that set, which was in fact Gus’s back office at Los Pollos Hermanos — the idea being that occasionally to boost business, Gus has one of his employees go stand out on the sidewalk with a big sign. I don’t have a chicken outfit in my office… My actual office is very boring and very messy, and it doesn’t have anything of particular interest in it at all, which is why I try to stay out of it as much as possible.