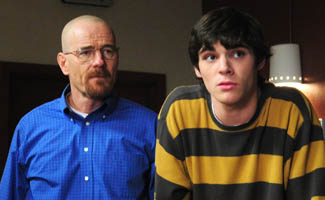 This week Walt makes it on a list of TV’s coolest dads while the New York Post compares Season 3 of Breaking Bad to The Wire.

• The New York Post writes about Breaking Bad, “If you did not watch season three of this addictive drug drama, you missed the best season of TV since season four of The Wire.”

• Walt is one of the St. Petersburg Times‘s coolest TV dads: “Is there a more menschy dad on TV today?”

• The AV Club considers Episode 10, “Fly,” one of TV’s best, distilling “much of what’s special about the show into 45 well-written minutes.”

• /Film discusses the Season 3 Finale, predicting, “I can’t believably see Jesse living past season four, unless he ships out of town.”

• Vince Gilligan tells the Calgary Herald that Walt is “an experiment in transformation and in transforming a character who you think you know into someone you don’t recognize at all.”