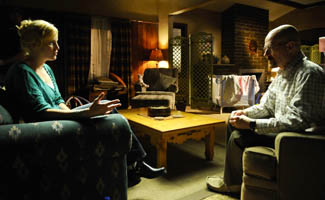 This week, Anna Gunn receives high marks from The Boston Globe and TV Guide, while The Hollywood Reporter chats with Bryan Cranston and Vince Gilligan.

• The Boston Globe singles out Anna Gunn in an article about building the perfect TV season: She “brings out new shades of anger, despair, claustrophobia, and mystification every week.”

• TV Guide “Cheers” Anna Gunn for her performances on Breaking Bad and an episode of Law & Order. “With such tours de force,” the review states, “We won’t be surprised if Anna guns for an Emmy.” (No Link)

• In a Hollywood Reporter feature, Bryan Cranston says the studio “questioned whether the goofy dad from Malcolm was the right choice” to play Walt. He also talks to THR about directing himself.

• Anna Gunn tells The Hollywood Reporter she broke tension on set after shooting a love scene between Skyler and Ted by feeding Chris Cousins (Ted) pie as the cameras rolled: “He was amused and mortified,” she says.

• Vince Gilligan, meanwhile, tells the Hollywood Reporter that he prepared to direct the Season 3 finale by watching Once Upon a Time in the West: “The movie puts me in the mood of the show, a Wild West state of mind.”

• Aaron Paul reveals to Daemon’s TV about Episode 12, “Everyone is definitely going to be on the edge of their seats.”

• Bob Odenkirk jokes with New York Magazine about Saul’s family: “My personal feeling is his family disowned him.”