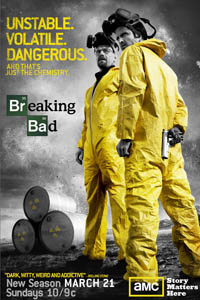 Throughout Breaking Bad Season 3, AMC will award Talk Forum commenters quoted in our weekly “What You’re Saying” post with prizes (limit one per person). The week, commenters will receive Season 3 posters. Coming up next week: Heisenberg Target Posters.

Commenters this week were shocked by Skyler’s revelation at the end of Episode 3, and had several theories as to why she would have an affair with her boss — and tell Walt about it.

“I think Skyler F.T. because she wanted to push Walt away. She couldn’t get rid of him; she tried kicking him out, but he came back; she called the cops and they told her they couldn’t do anything. Walt was carrying on… like everything’s OK, despite the lie he’s caught in with Sky. She was like, ‘Guess what!’ Broke my heart to see that happen, but I gotta say it was awesome!” —Janky

“I always did believe [Skyler] was a control freak. During the whole first season, Walt scarcely made a move without asking her opinion first. But as time wore on, Walt gained some courage and grew into his Heisenberg persona. Once Skyler knew what was going on, he had to bring Heisenberg into his relationship with her. The thing is, she has to come up with a new personality too, and we are seeing the results of her transformation now.” —DRKellogg

“Skyler is completely justified in getting some level of revenge on Walt. Or at least gaining footing on this uneasy ground that HE’S created. She wasn’t sleeping with Ted for money, nor was she doing it for anything other than, I believe, revenge and personal validation.” —Jessica Kemp

“Skyler is carrying a LOT on her shoulders. I am sympathetic to her, but still shocked at the coldness she is showing Walt. Maybe that’s how she deals with things… a vicious yet silent rage burns inside her rather than a loud screaming anger that she lets out. Those three words (I.F.T.) cut poor Walt to the bone, I’m sure.” —SlyGirl08