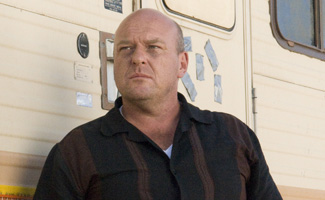 This week, Dean Norris talks to USA Today and Bryan Cranston trades quips
with Wanda Sykes, while Bullz-Eye.com ranks Breaking Bad in its Spring TV list and the Plain Dealer includes the drama in an article about TV’s golden age.

• Bryan Cranston visits The Wanda Sykes Show, where he makes an Earth Day observation: “What about human recycling? When Grandma passes away, toss her into the compost heap.”

• Dean Norris talks to USA Today about everyone’s favorite DEA agent. “Nothing could be better than to set up a character, dismiss him and then bring a whole different side to him,” he says. Norris also chats with the LAist

• 411mania.com talks to Anna Gunn, who explains how Breaking Bad‘s Pilot script “read not just like a good TV show but basically read like one of the best indie film scripts I’d ever read.”

• Bullz-Eye.com places Breaking Bad at #3 in its Spring TV Power Rankings, explaining “Whatever happens, with Breaking Bad, one thing’s for sure: it probably won’t be what you expect.”

• Cleveland’s Plain Dealer singles out Breaking Bad in a piece about the golden age of television. Breaking Bad is as “wildly satirical as it is emotionally searing,” the newspaper states.

• Want to know what happened in Episode 6? You can read recaps and reviews in the Los Angeles Times, The Star-Ledger, The Wall Street Journal, HitFix.com, UGO.com, A.V. Club, T.V. Squad, the San Francisco Chronicle, Time, New York Magazine and IGN.com.