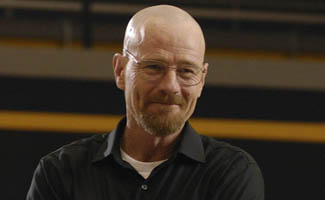 In Part II of Bryan Cranston’s response to fan questions, the actor discusses his Breaking Bad character’s tragic flaw, the most difficult scene he’s shot so far, and the taste of blue rock candy.

Kjetil: Many similarities can be drawn between Walt and the tragic heroes found in the Greek, Roman and Shakespearean theatre. From this perspective, what do you believe is Walt’s most significant tragic flaw?

A: Off the top of my head I would say short-sightedness. He underestimated the effects of this. He thought he could control it, grasp it, shape it to fit his life. It’s not possible in this condition. So it’s an interesting conundrum for him, and now the third season is going into how Walt has started to accept who he really is in order to survive this dangerous environment. We talked before about how as long as he doesn’t recognize that person in the mirror it’s okay? Now he’s looking right at him, and he realizes, “I’m Heisenberg and I have to own that.”

rockmama: Can you imagine Walt ever finding redemption?

A: I think that’s why he’s so focused on looking for the end game: What’s the final number he needs? And I think he feels that if he can reach that number, then I’m done. I’m out, and I can start working on my redemption. And perhaps I can be forgiven. If that doesn’t come about, then at least let me just get this done before I check out. And quite frankly, he knows he doesn’t deserve forgiveness — and if it never comes then he’ll have to just take that with him.

k_wind88: Which scene was the most difficult for you to shoot?

A: I think the most difficult was near the end of Season 2 where I go to Jesse’s house and he and his girlfriend are strung out on heroin and she starts to choke. My instincts are to save a life, and the time it takes me to round the bed and get to her, I realize, “No wait a minute. She’s going to kill Jesse with this heroin, and she’s blackmailing me.” Then a split second later, “Wait a minute, no. This is a human being. What should I do?” She dies because of my inaction, then an immediate flood of guilt rushes through me, and then almost as immediate, woosh, that drops off. And I’m not okay with it, but I’m just accepting of it. That was difficult because he goes through so many different emotions through that short period of time.

Nick: Did you need a stiff drink, after [shooting that scene]?

worst quarterlife crisis ever: Some of the scenes in the premiere (particularly the opening) seemed like they were inspired by Sergio Leone. Was that some sort of tribute?

BC: It wasn’t a tribute to Sergio Leone, but we certainly talked about that. I wanted it to have that same bigness — a vast, colorful sky. And with all the best plans we made, the one day that we had to shoot the opening scene it’s raining. So if you look at that sequence again, in the beginning of it you’ll see gray clouds.

The entire teaser has no dialogue. I knew it all had to be visual. We had this vision of it being hot and dusty, and the low wide shots are what I think sell it the most. The Cousins crawl toward us and split the lens. They’re coming at us. And Sergio Leone talked about that kind of feeling as well: The spaghetti western type with rattlesnake sound effects. At some point during that teaser we wanted you to be asking, “What the hell is going on?”

vincentg: Have you ever snagged a piece of rock candy meth for a snack?

A: I have. It’s good! It’s like a bubble gum flavor. We were shooting a scene and I saw Aaron — in between scenes, he’s like nibbling on it — and I go, “Hey! Don’t eat the product!” And he says, “Oh man, these things are so good!” And I said, “You gotta be kidding me, you’re eating these things?” He says, “Yeah, you gotta try ’em!” He keeps bothering me to try one, and I try one and I go, “That’s pretty good. I don’t know why I like it, but it’s pretty darn good.” So yeah. We get on the set, and we start jonesing for the rock candy crystal meth, and we eat it. [Laughs]

Click here to read the first part of this Season 3 interview with Bryan Cranston.