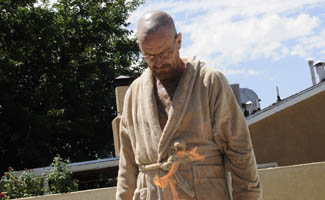 Press outlets this week turned their attentions to the White men, with The Jacksonville Observer talking to Bryan Cranston about Season 3 and Emmy Magazine speaking to RJ Mitte about acting with cerebral palsy.

• The Hangover‘s Bradley Cooper is a fan of Breaking Bad, at least according to his choice in apparel.

• In her Paste Magazine feature Great Expectations 2010: Breaking Bad, writer Kate Kiefer posits that “when the series ends and Walter White dies, whether quietly in bed or violently outside an RV, we’ll miss the son of a bitch.”

• RJ Mitte (Walter White Jr.) is included in an Emmy Magazine story on actors with cerebral palsy, in which the young actor says that on the show “we don’t make a big deal out of it. It’s just something to go through life with.”

• Bryan Cranston tells The Jacksonville Observer that Season 3 of Breaking Bad will be “like a million-piece puzzle that’s hiding the picture on the box.”