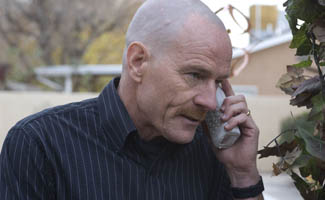 Breaking Bad‘s plaudits continue as publications like the New York Post, the AP, Time Magazine, and even master of horror Stephen King at Entertainment Weekly single out AMC’s drama in their best of the year (and century) lists.

• In his “Best of 2009” column in Entertainment Weekly, Stephen King lists Breaking Bad as the Number 1 show to watch, explaining, “BB is brilliant, terrifying, shocking, and sometimes screamingly funny”

• Time Magazine critic James Poniewozik singled Breaking Bad out as one of the best television series of they year: “Raw but often funny,” he writes, “this is a must-see exploration of morality and mortality.”

• Poniewozik also pointed to Breaking Bad for his list of the best television episodes of the year list, referring Season 2’s Episode 12, “Phoneix”: “Cranston makes Walter’s decision [to let Jane die] chillingly real while at the same time showing us the huge effort it takes.”

• The AP’s Frazier Moore singles out Breaking Bad as one of his best shows of the year, explaining that “against all odds, in its second season, this drama upped the danger level, getting even stranger, more addictive and, yes, even funnier.”

• In its “TV We’re Thankful For” feature, The New York Post calls out the “complicated leading men of AMC… Walter on Breaking Bad is the poor soul we want to feel sorry for but come to loathe the more we know him.”