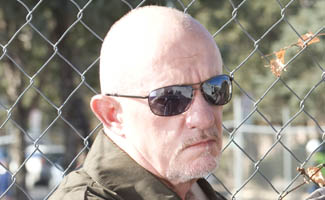 The actor explains what it takes to be a cleaner, dishes on his kiss with another (male) Breaking Bad cast member and hints at the biggest mess he’s ever had to clean up in AMCtv.com’s exclusive interview.

Q: Your character is a pretty mysterious guy. What did Vince Gilligan tell you about him?

A: Well knowing me, Vince has wisely told me very little. [Laughs] Obviously he’s a cleaner who comes in to take care of the mess. I don’t know much more than that. But in the footnotes it did say we will learn more about him in the next season. That’s all I know at this moment.

Q: One of the most famous cleaners in pop culture is Harvey Keitel’s character in Pulp Fiction. Did you take any notes from him?

A: It’s such a wonderful performance that Keitel gives in the way that Quentin Tarantino had set it up — I mean what a great set-up! I immediately tried to put it out of my mind, quite honestly. His cleaner ain’t my cleaner. But throughout this world, you would suspect there had been a great many cleaners, whether government-run or individual contractors.

Q: So what did you base your cleaner on?

A: Coolness and sophistication, hopefully. I tried to think like someone who is very cool under pressure, someone who will definitely not make any flagrant mistakes. Meaning you approach the situation in a very business-like fashion. Military men throughout history are unflappable under fire. The noisier it gets, and the more chaotic it gets, the cooler you try to be. My mother worked for the CIA, and she would say that in a situation room, the more pressure there was in any given situation the more silent the room became. People were not running around with their heads cut off.

Q: That’s kind of the opposite of John De Lancie’s character, who panics and causes this plane crash.

A: Yeah. John, by the way — I’ve kissed two men in my 41 year career: Once in The Lion in Winter, when I played Richard the Lion-Hearted on stage; and then John did an episode of a series I did called Fired Up where we kissed in a dream sequence. And the thought of John and I kissing each other, you know, it’s a little grisly.

Q: Did you two get a chance to reminisce about that?

A: Yeah we went out and sat in the back seat and just hugged and smooched.

Q: Do you share that cool under pressure quality with Mike?

A: I have to think about that. I have never ever thought that acting was work. We could be out in the rain at 3AM and I could be miserable, but I’ve always realized how lucky I was. I don’t know I really have the right to say that I’ve had a great deal of pressure. But I’ll tell you I’m enough of an actor to appreciate those people who are cool under pressure, and hopefully be able to bring that to the character.

Q: What’s the biggest mess you ever had to clean up?

A: Mm, what a good question. I’m not going to tell you. [Laughs]

A: Oh my God! You know, I’m a kid from northeast Washington, D.C., and it was never a garden spot — let’s put it that way.

Q: So you know from whence Mike comes.

A: Maybe I do. I know a lot of people. At this age you’ve collected a lot of acquaintances, and few friendships.