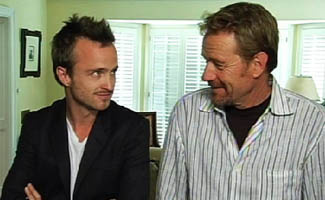 How do Breaking Bad‘s leading men feel about the Emmys? AMC News’s Jacob Soboroff traveled to Bryan Cranston’s house to chat with Cranston and his Emmy-nominated co-star Aaron Paul about their respective nominations (for Bryan, his second in a row after taking home the statue last year).

Watch as Bryan congratulates Aaron, who he jokes “acted better the second season,” while Aaron reminds Bryan how often he praises the Breaking Bad star for his genius portrayal of Walter White.

“And yet,” Cranston replies, “not often enough.”