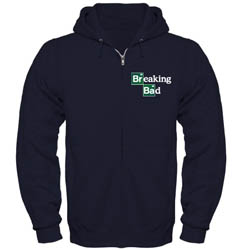 Want to dress like Jesse (or at least come close)? Here’s your chance to be the proud owner of a Breaking Bad zip-up hoodie. Tell us: Who do you think will discover Walt’s secret first?

We’ll randomly pick a winner from the comments below and award a sweatshirt.

We’re giving away a hoodie every week, so be sure to check the Breaking Bad blog for this week’s winner and next week’s question.

Look after the jump to see last week’s winner.

Question: What do you think Walt could say to win Skyler back?

Winner: Tony Arevalo: “It is actually quite simple. After realizing that he himself (Walter) was linked to the plane crash… WALTER WILL TELL SKYLER first of all that he is sorry for keeping things from her the whole time and that the only reason he did it was because he thought he was gonna die. As he COMES TO REALIZE THAT ONE CAN DIE AT ANYTIME (from the plane crash and from the heroin overdose) Walter will still try to fool Skyler by yelling at her saying that if he was actaully having an affair would it really be smart timing of him to pick when she was pregnant and when he had cancer. He will convince her by yelling and eye contact cause he knows an affair is really not true.”