Q: You’ve done effects for big-budget movies like Lethal Weapon 4. How different of an experience is it to work on Breaking Bad?

A: On films I did some pretty big explosions. For Lethal Weapon 4, I did all the killing on the foredeck of the ship and all the flames in the barrels shot off the back. For TV one has to work a little quicker, be more assured. On Breaking Bad it’s not about bigger; it’s about better. Vince is very mechanical — he could be an effects man himself. He wants to know what we’re doing and he knows how we do it. That makes my job easier. And more challenging, but in a good way.

Q: What was this season’s toughest special-effects assignment?

A: Blowing up the turtle with Tortuga’s head on it for Episode 7 was awfully complicated. We did a lot of tests to get it the way Vince wanted it. I’ve never tested an explosion that much. What looks like one explosion is actually nine separate explosions, quickly timed: First the head explodes, then the turtle, then a third mortar underneath the turtle to blow it into the air, the fourth to blow a mannequin out of the shot and the next five go off in front of the stuntmen to make them appear to be blown up. The whole thing went quickly — as fast as I could pull the switch to set each one off. 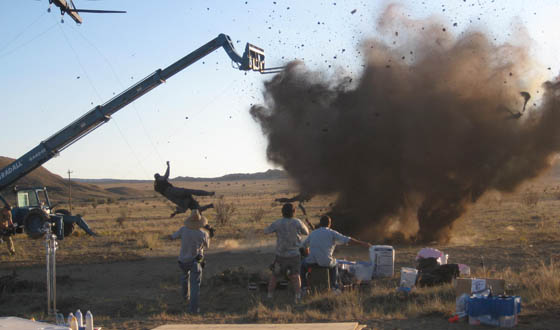 Q: You actually dealt with several heads this season, including crushing a man’s head under an ATM machine.

A: Every so often Vince tells us, “I want to see this effect without the cuts. Let’s do it as real and as scary as we can.” The part that sold the shot to the viewer was having a hole in a false floor we built. We covered the hole with a piece of sandblasting paper and painted it to look like the floor. That allowed the stuntman’s head to go down a little bit into the floor and not up into the base of the ATM. Even when people saw it happen on the set it scared them. The actor didn’t like it, but it was actually really safe.

Q: You started your career doing effects for movies like Escape From Alcatraz and  Star Trek III: The Search for Spock. How much has the business changed since then?

A: What we do hasn’t changed that much. We have some better tools to do things with, and some of the parts of it have gotten easier — like using CGI to get things out of the shot that we used to make the effects. There’s less guessing these days: Because we’re in Albuquerque and Vince is often in Los Angeles, being able to put everything on QuickTime videos and send them over takes care of communications issues. The producers can see it and sign off on it right away, so it’s much cleaner.

Q: Are there any other challenges to working in Albuquerque?

A: Albuquerque is a nice place to work, but it’s new to the industry so the infrastructure that we need to build so many different, weird things isn’t always there. Like nylon tubing or surgical tubing — they don’t have long lengths of that ready to go. The hardest part of my job is to envision what might be necessary for next episode and to have things ready.

Q: You were responsible for finally revealing the mystery of the pink teddy bear. What went in to that effect?

A: There was a full-on 300 foot crane out on the street with a camera pointing straight down — there was also a camera pointed sideways — and we dropped the bear down into the pool. Then we had an air cannon in the pool. We tested that with different shapes of cones and cylinders using different pressures to change the shape of the splash, and showed the results to Vince. He chose the one he wanted, and that’s the one we shot.

Q: What effect are you most proud of this season?

A: One of my better ideas was getting Walt’s spare tire to roll at the camera in Episode 12. We built a 30-foot ramp, painted it the same as the stucco on the motel so you wouldn’t see it and then dropped the tire down the ramp. What was amazing was that we hit the camera with the tire both times we tried it. One of the most important things I’ve learned is to make things as simple as possible. That gag in the wrong hands with the wrong approach would take forever, and it might still not work.

Check back Thursday for an exclusive interview with Breaking Bad’s creator, Vince Gilligan.