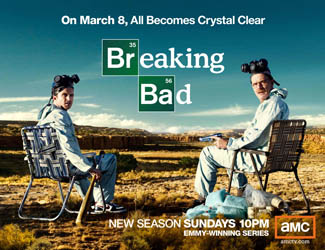 This week Breaking Bad fans debated the meaning of the episode title “Over.” They also speculated about whether Hank can be trusted, and wondered if Walter Jr. might one day have to pay the price for his father’s misdeeds.

• “I think Walt has gone over the edge. That’s what the ‘Over’ means. He can no longer fully control his switching from one personality to another. Walt is like Jesse and the people he makes meth for: He’s an addict. In his case excitement is the drug.” — Tator

• “I think the title means Heisenberg is over being Walt. He is becoming proactive now. The lawyer is running money scams for him — it’s all on the level as far as a paper trail. He is also over hearing about his brother-in-law’s escapades… Heisenberg has bigger tales to weave.” — JohnnyFriday

• “I never trusted Hank from the beginning. There’s something dark behind him. I’ve felt this for awhile now. He’s into something dirty for sure.” — lisa977

• “As much as I love the ‘Big Lug,’ there are quite a few hints that Hank’s not on the up and up. Remember, when he broke out the Cuban cigars? And how he just snickered when he thought Walt was buying pot? When are we gonna find out more about what he’s doing on the side?” — diksee

• “If Hank is dirty, he sure knows how to cover his tracks. The whole scene in Mexico could have been set up by him. I mean, is he really that lucky? On the other hand, he could be just a full-of-himself cop.” — desertwave

• “Oh, please don’t kill off Waler, Jr. to make Walt pay a price for his sins. Walt and his conversations with his son are some of the best moments of humanity in the show. It’s their relationship that transcends all the evil Walt is doing.” — rosejones