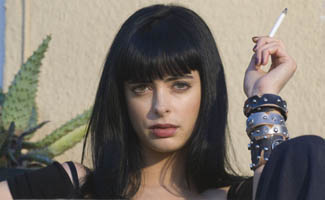 The actress discusses falling in love in real life and on television, going to heroin school and witnessing her own death in AMCtv.com’s exclusive interview.

Q: Did you know your character would die when you signed onto the show?

A: Yes. I didn’t know beat for beat what was going to go down, I just knew it was going to be good! People were like, “Oh my God they killed you!” But I feel like if you’re going to go out, you should go out with a bang.

Q: You recently played an addict in The Last International Playboy (Frost). How did that character compare to Jane?

A: It’s so funny, I’m either doing comedy or playing heroin addicts! I think people think of me for these kinds of roles because I’m pale and I’m naturally thin and I have black hair. With Last International, my character was very young and in the party scene, just dabbling and falling off a little bit. She gets help right away. Dealing with somebody who’s been battling this for ten years is so much different. And as soon as Jane starts doing heroin the monster is unleashed, and you see why she stopped doing it. It’s like Jekyll and Hyde. I wanted to bring a sense of tragedy and real life to Jane.

Q: We see Jane go to a Narcotics Anonymous meeting. Did you ever visit a real meeting to prepare?

A: I went back and forth with that, and asked some opinions from friends. My plan was to go, and I found a meeting that my friend had gone to, but I felt like it was going to be disrespectful. Like, “Oh, I’m an actress, I’m going to show up and observe you people.” I felt it was a little sh–ty. I’ve had some people in my life that have had problems with drugs, and we had a former addict who was there to help us and show us the steps. He also taught us how to cook heroin, because I had to cook it like I was surgeon. So I was cooking heroin between every single take — we’d cut and it would be like, “OK Krysten, go back to heroin school!”

Q: You’ve starred in several romantic comedies. Did your experience playing a character that falls in love on Breaking Bad differ from those movies?

A: This character arc was so much more real than the romantic comedies. They show the little intimate moments where people are getting to know each other, and falling in love and sharing things about each other. And then getting to the point where you don’t know if you’re in a relationship or not, and how do you know to still be cool. This part came to me in a really perfect time when I was falling in love in my real life, and I was bringing a lot of that to Jane. So I was getting to play real love with Aaron Paul.

Q: You get the sense that Jane had a fairly rebellious youth. Is that something you went through?

A: Absolutely. Growing up in a small town, I was really bored and I didn’t have anything that was just mine — something that I could be proud of for myself. Then, luckily, I was scouted at the mall and I got to travel the world. But before that I was bored. And that’s a dangerous thing for young people. And I could see how easy turning to drugs or anything out of boredom can be.

Q: Was it difficult for you to film your own death scene?

A: Playing dead and hearing peoples’ reactions around you is really f—ed up. There were a few takes where I had to stop because it was too overwhelming. A lot of the crew weren’t able to watch the choking scene, just because it’s a person and you’re watching it happen and it’s just so real and authentic. It was very technical as well — I couldn’t tell when Bryan Cranston was doing his thing, so it was like, “OK, you’re going to count this many beats, then do this, then do this.” When I first saw it, I had a hysterical laughter fit because it made me so uncomfortable. My baby sister is 12 and I didn’t want her to see it, but she did. She said, “Kryssy, it made me really uncomfortable, but I know it’s not real.” My mom, on the other hand, won’t talk about it. She’s like, “You were great, you were really good; I can’t talk about it any more.” And then you hear her getting really choked up.

Q: Well maybe you can come back and haunt Walt.

A: [Laughs] I wouldn’t be surprised.

Be sure to also check out the interview with the actor who plays Jane’s boyfriend: Aaron Paul.