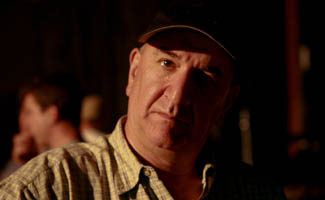 Cinematographer Micheal Slovis talks about joining Breaking Bad in its second season and explains the meaning of the “Breaking Bad wide shot” in AMCtv.com’s exclusive interview.

Q: What made you agree to come on board for Season 2?

A: It’s actually a cute story. I had done CSI for three years and I left that show because I live in New Jersey and I was tired of flying back and forth to Los Angeles. I was looking for something in New York because I wanted to stay home. So when they called me up I said, “No thank you. I’m not interested.” And my wife said, “Michael, reconsider that. Have them send you the show. I’ve seen the show. It’s what you’re looking for.” So, I sat down and my wife and I watched the entire first season basically in one sitting and I turned to her and said, “You did a really bad thing here. I can’t say no to this show now.” She said she knew what she was doing. Even though she didn’t want to live apart and it was really hard. [To his wife] Isn’t that how it happened? She said yes. She’s smiling.

Q: You were the DP for the whole season. What’s it like to work with a different director who has a different vision almost every week?

A: Since I shot every episode, I did not have a chance to prep with individual directors. So they would come up with a concept and come on set and rehearse the scene. If it rang true to me and I felt it was the way to go, I’d say, “Great, that’s a good idea.” If they wanted something that felt tangential to the style of the show we were trying to maintain, then I might make a suggestion to try something else. If you’re a smart director you listen to the people that are there all the time. I tuned in very quickly to what Vince wanted. I would call Vince and ask if he saw yesterday’s dailies, and what he thought of them. And that would give me a better idea as to whether I was on the right track or not. And after about three or four episodes I got what he was looking for, not 100 percent of the time — nobody can do that — but a good 80 percent of the time.

Q: What would you consider the signature Breaking Bad shot?

A: The wide shots people refer to as Breaking Bad shots. Directors will say, “Let’s do the Breaking Bad wide shot,” which in television is not something that you very often see. Vince really likes holding things in wider shots and I happen to really like it also — it puts your character into a place or a locale, which tells you something about the character. So I look at it as a storytelling device. The other kind of shot that’s somewhat characteristic of the show is when there is something big in the foreground and then something further away in the background wide. We call it wide and closed. You might keep the focus on the money, let’s say, in the foreground and our characters are in the background, either out of focus or much smaller.

Q: Do you ever get so caught up in the acting that you forget to pay attention to the technical side of things?

A: That’s what I am supposed to be paying attention to. My job is not just to do lighting and set up shots but to make sure the lighting and the shots reflect the scene in the most effective way. If I’m moved by what I see, then I know we’ve done well. I have people that operate cameras and lighting people and rigging people. All those people keep an eye on the technical stuff for me, and I’m concerned with the storytelling. That’s what interests me about the job: Efficient, effective storytelling.

Q: What is your favorite scene?

A: I can’t tell you because it’s later in the season.You’ll know it when you see it. It gets crazier as the storyline develops. Here’s one thing: What Vince and the writers do is drop a single line in an early episode and then not mention anything about it until nine episodes later, and then all of a sudden there’s an episode all about that single line. It’s intriguing to me to work on something that is so well planned out and circular in terms of its storytelling. I think it’s just brilliant.