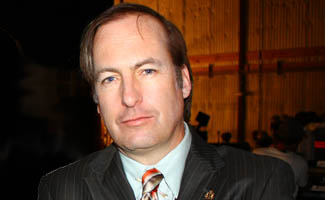 Q: You played a sleazy agent on The Larry Sanders Show. Do you see any similarities between that role and Saul Goodman?

A: There’s a similarity in that both of those guys are wheeling and dealing with other peoples’ lives — and not their own. They don’t lose much if they lose: Saul Goodman doesn’t go to jail, and a Hollywood agent doesn’t lose a job if he f—- up a contract. They’re also both performers. Saul Goodman is a bit of a performer in his life. He, like Stevie Grant, is putting on a show for the people around him because it suits his job. So Saul is the chess player and his clients are the pieces on the chess board. As much as he’s in their corner, it’s a bit of a game to him.

Q: What makes you so well suited to the role of shady professional?

A: It’s all about realistic comic acting. Saul is a clown. I thought a lot about how this guy talks, and he fills the air with words because he’s thinking on his feet, because he’s improvising, because he entertains himself as well as some of the people around him… although they’re probably not nearly as entertained as he is by his flash. Like a comedian, he has a cadence to his speech, he’s constantly characterizing everything about him.

Q: Did you model Saul on anybody you know?

A: Yeah, I know people like that. I don’t want to name names, though. They’re probably vindictive type people. I made a movie called Let’s Go to Prison, and I got to see the court system — there’s a lot of wheelin’ and dealin’ that goes on because our prisons are overpopulated. I shot that movie in a prison for months, and a lot of the extras on that movie were ex-cons. In fact, some of them were acting and playing cons in the same prison in which they were incarcerated. I talked to those guys a lot, and they’re amazing people to have survived that. There are lots of guys like Saul who are good at what they do, and some people probably need them. I don’t know if Walt needs somebody like this in his life, but it seems like Vince [Gilligan] just can’t stop thinking of ways to torture this guy.

Q: Have you ever had a need to call Saul?

A: I haven’t, but I could imagine myself doing it. I actually met a bail bondsman because my friend went to jail. And he was a nice guy who really knew his job — knew who to pay, who to talk to. And yeah, you definitely go to the guy who works his way around the system as opposed to the clean guy who just does contracts. You go to that shifty dude and give him all the money you can. This is what happens, man. These guys are real, and some day you too may have to go see Saul Goodman.

Q: You starred in a series of Miller Beer commercials in 2004. Was that experience helpful when you were shooting Saul’s commercial?

A: It was, but what was more helpful is that I live in Los Angeles, so I get to see these lawyers on the backs of busses all day long. They always have these big smiles and they usually have one hand holding a phone and the other hand holding a bundle of cash. There are the accident lawyers, and then there are the guys who get you off when you have a DUI. I love those DUI guys — they’ll get you out of any DUI, which is a scary prospect [Laughs]. So I got to do some improvisation for the commercial, and I was thinking about those guys as I walked around my fake office looking like I was reading law books and all that stuff.

Q: Saul’s haircut is pretty interesting. Did you enjoy sporting a mullet?

A: I came up with that! [Laughs] I thought he should have a really good mullet — what I would call a business mullet, which is really clean in the front with a good long comb-over and then a cleaned up mullet in the back that just underscores the fact that he thinks he’s still a young man, even though he’s really not. Saul is the greatest kind of person to play, because you don’t get to be like this in your real life. I’m just a dad, right? I’m takin’ the kids to school and going to the office. But Saul Goodman is loaded with bulls— style.