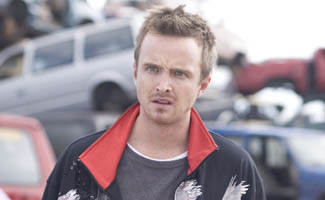 The actor who portrays Walt’s partner-in-crime, Jesse Pinkman, discusses the duo’s ever-shifting chemistry and stepping back into his role with Bryan Cranston holding the reins in AMCtv.com’s exclusive interview. Click here to read Aaron Paul’s interview for his upcoming horror movie, The Last House on the Left.

Q: After a strike-shortened first season, did you ever doubt Breaking Bad would be back?

A: You never know. But honestly, I would be really sad at society if they didn’t bring it back, just because I think this show is genius. And even though I think the first season was beautiful, the second season absolutely knocks it out of the water.

Q: Season 2 picks up exactly where the Season 1 finale left off – was it difficult to step right back into the moment?

A: It was definitely surreal, but it was great because Bryan Cranston was the director. So we jumped into something very familiar on-screen and off. And I loved how they started our second season — how there’s no time lost, and you realize that Tuco is just this insane lunatic, more insane than you imagined. Jesse is literally thinking he is not going to live another moment. So now he’s just trying anything to survive.

Q: Was it strange to have Bryan directing you?

A: Dude, it was amazing. I truly hope he continues to do this. I would like him to direct an episode each season — his episode turned out beautifully. How he can step into the shoes as a director and a star is just beyond me. It was a nice way to begin, because we didn’t have someone we didn’t know directing. I know Bryan very well, and stepping back into this character with him holding the reins ready to make that happen with such an intense script couldn’t have worked out better.

Q: How do you think Episode 1 sets the tone for the rest of the season?

A: The first episode is really non-stop, heart-pumping intense, and it just goes above and beyond from there. The show might slow down to give the audience and the characters a chance to take a breath, and maybe think they’re okay, and then it just keeps going like a snowball effect. Second season there’s a lot more sex, drugs and rock ‘n’ roll. [Laughs]. That’s what we’re all about here at Breaking Bad.

Q: It sounds like it’s going to get much darker. Does that make it harder to integrate the show’s humor?

A: Actually, I thought it became more natural. It’s so funny this season, and the circumstances just make it funnier. It’s fantastic how you find yourself laughing at such horrible things. Even as an actor reading these scripts, I found myself laughing at things I knew I should absolutely not be laughing about. You’ll see. [Laughs].

Q: Do you feel like the chemistry between Walt and Jesse has altered this season? Does it feel to you like they’re on a more equal turf in this episode?

A: Yes and no. Jesse’s not afraid to bring anything up to Walt. He’s definitely going to put in his two cents, like when they’re talking about what to do with Tuco. Jesse’s idea is young and guff, and Walt’s is more sophisticated and scientific. So even though Jesse and Walt are becoming more comfortable with each other, they are still such polar opposites as human beings. There’s always going to be that butting of heads and pulling back and forth tug of war. That’s what works with these characters. But I think as the second season goes on, they become to truly trust one another.

Q: Vince Gilligan says Season 2 is about chickens coming home to roost. What does that mean to you?

A: Oh man. I think Walt and Jesse are coming into their own — they’re feeling comfortable. Even though they’re terrified, they know what’s going on. And so many things come their way that distract them or terrify them — but they do realize that they have something good coming, and they’re making good moves. The chickens are coming home to roost. I love that.

Click here to read Aaron Paul’s exclusive interview about his upcoming film, The Last House on the Left, on the Horror Hacker blog.