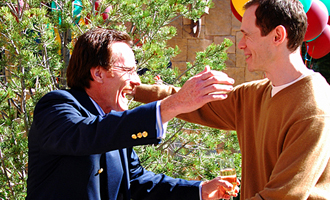 The AP calls Breaking Bad a “nervy” drama in its list of the year’s top shows. Time Magazine — which ranks the show at No. 6 in its list of Top 10 TV Series — says the drama affords Bryan Cranston the “opportunity to transform himself in a surprise-Emmy-winning role” as Walter White and “captures both the absurdity and the emotional reality” of White’s situation.

Time also likes the drama’s pilot, placing it at No. 5 on its list of Top 10 TV Episodes. It “played like a small film” and “had quite a big job: to set up a bleak premise… and a suspenseful storyline.” Walter White — “brilliantly captured by Cranston” — is “a man who’s dying even before his diagnosis… By pilot’s end, his criminal turn has perversely revived him; he’s seizing the day,” the magazine remarks.