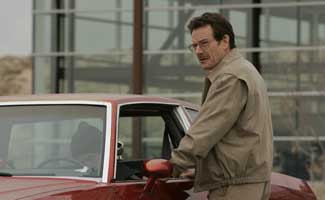 “We congratulate all of our winners on this incredible accomplishment,” said AMC General Manager and Executive Vice President, Charlie Collier. “And thank them for their continued hard work and dedication, which has been central to Mad Men‘s and Breaking Bad‘s critical success.”

Breaking Bad was also nominated for Outstanding Cinematography for a One-Hour Series for the Pilot but, unfortunately, cinematographer John Toll didn’t win in that category. Who did? Mad Men‘s Phil Abraham.

It’s not over. Breaking Bad is nominated in two more categories, with those winners to be announced at the Primetime Emmy Awards Ceremony this Sunday, Sept. 21: Outstanding Lead Actor In A Drama Series (Bryan Cranston as Walter White) and Outstanding Directing for a Drama Series (Vince Gilligan for the Pilot). Mad Men is also nominated in each of those categories. Let the sibling rivalry begin.