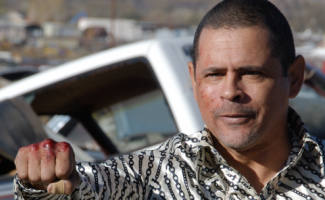 Raymond Cruz talks about the inner workings of Breaking Bad‘s most volatile character then deconstructs a beat-down in AMC’s exclusive interview.

Q: You’re on this show called Breaking Bad, and you’re definitely the baddest dude on it. How does that feel?

A: Yeah. I have to out-break Bryan Cranston. It’s a big bad breaking contest. It’s a challenging character, not easy at all. That’s the reason I wanted to do it. I’m not going to make a judgment and say Tuco is out of his mind, but his parameters are definitely a lot further out there than other people’s. To try to pull this character off, it’s such a high energy level. It’s not necessarily fun, it hurts, man. You get drained physically, emotionally and mentally. You get exhausted just doing one scene. There is no finesse. And I’m not that kind of person at all. I’m pretty quiet and easy-going.

Q: Was it disturbing for you to shoot scenes where Tuco goes off and gets violent?

A: No, it’s just work. You’ve got to be willing to go to these dark places. They let me do it the way I want to do it, because I want the violence to be real, and not look like a stunt fight. I grew up boxing, so when we went to shoot, they had a stunt coordinator there and they’re like we want the punches to come down at this angle and this, and I’m like, ‘Hey listen, that’s not the way it would happen.’ I’ve done tons of fighting and I’ve done most of my own stunts in movies, so I said, ‘Let me show you how this character would beat this guy to end it.’ And they were just like ‘Oh my God!’ There was no mercy, and when you look at it, it looks like I really took him apart. A lot of people that saw it were like, ‘Dude, were you really hitting that guy?’ I’m like ‘No, I never touched him man.’ But I did strain a muscle in my back doing it. That was a rough ride back to the hotel.

Q: Of course, Tuco is not just violent for the sake of it. He’s a drug addict. How did you approach that?

A: It’s a lot of research. You figure out the physiological effect of the drug on the person and you start translating that. I don’t do drugs, I don’t smoke. I’ve never had a drink in my life. But I’m a big reader, so I pulled all the information I could about meth: how it affects people, how it is externalized, internally how it feels. I found all these first-hand accounts from addicts, talking about how it affected them, and how it took them to these dark places and what they were seeing and what they were tasting and touching and how the external world looked to them. And then you take that and you try to layer your character with those emotional reactions so that whenever Bryan interacts with me, he’s hitting triggers that set this stuff off — and then you just let it come out, man. There is so much work you have to do that no one ever knows about man. It’s like building a motorcycle. And you’re looking at the bike and people are going, ‘Wow, that’s a really mean crazy-looking bike.’ But they don’t know every nut and bolt of how it’s put together.

Q: You were in an episode of The X Files. Did you get to meet Vince Gilligan then?

A: Yeah when I worked on The X Files, that was pretty cool. And I know Vince worked on it, but I just don’t remember. I can’t remember last year, buddy. I work and I let it go.