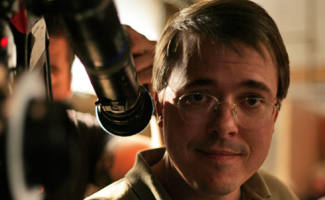 Series creator and executive producer Vince Gilligan talks about writing for cable, and making a bad guy lovable in part one of AMC’s exclusive two-part interview.

Q: A lot of people have been drawing comparisons between Breaking Bad and Showtime’s Weeds. How would you compare the two?

A: I saw the pilot to Weeds, and what I saw was a really smart and funny show that was to my mind more of a slice of life in the suburbs. And I feel like what differs about Breaking Bad is that our show is more of a character piece centering on this one individual, Walter White. And I think our show is also much darker because, of course, methamphetamine is a much darker, more hurtful illicit drug than marijuana is. It really does tear peoples’ lives apart, it tears apart entire towns. And marijuana, it can be argued, is not as dangerous, not as hurtful a drug.

A: We definitely don’t shy away from the comedy in my mind. I like to think of this as a funny show. I love writing comedy, although hopefully in Breaking Bad it’s a realistic kind of a comedy. It’s the kind of comedy that is never about people telling jokes or pretending to be funny. But when the moment needs to get serious we don’t shy away form that either. That’s the kind of mix I love to go for, which is a mix of really stone serious stuff, and then the more absurdist moments. And maybe it is a tricky mix, but I like the challenge and hopefully we succeed with it more times than we fail.

Q: Speaking of a tricky mix: Between the gore and the
language, you must have to strike a pretty delicate balance with what
you’re able to show on TV.

A: I did seven years on The X-Files, and the gore of that
episode [Episode 2, “The Cat’s in the Bag…”] was nothing compared to
some stuff we used to do on regular network television. The funny thing
about America is that gore, no pun intended, goes down a lot easier
than sex or bad language. And as far as bad language goes, on The X-Files
we didn’t have half the language at our disposal we have on AMC. When
we wrote the pilot I figured no one but a cable network will do this
show in the first place because of the subject matter, and the odds
would be better that I would get to have the characters speak in ways
that they would indeed speak in real life. I don’t go out of my way to
put curse words in the episodes, but on the other hand, people who live
this kind of life are not models of decorum. So certain words have to
be bleeped from time to time, and we try to use it very sparingly
because we don’t want to annoy the audience. But it would seem very
off-putting and weird for me to have our show take place in this
violent and corrupt and dark world and then have certain characters say
“Oh Fudge” or “Darn it, somebody stole my meth!”

Q: In terms of subject matter, how was it to go from The X-Files to Breaking Bad?

A: Honestly, it’s not as much of a transition as I might have thought it would be. Because looking back on The X-Files, we had to work very hard to make a lot of very strange and bizarre concepts realistic, and therefore palatable. Chris Carter, the guy who created the show, told us that his philosophy was always that it’s only as scary as it is believable. And I thought that was a great mentality, and I’ve lived by that and I keep thinking of that. In the case of Breaking Bad I would alter that philosophy to be that it’s only as good a show as it is believable. And so we’re not trying to make the audience believe in mummies or aliens or ghosts. We’re trying to get the audience to believe in these characters, who are doing a lot of despicable things. Walt has a terrible decision-making process. He makes terrible choices on the show, and yet if we are to expect the audience to keep watching, we have to understand why he does what he does. We don’t have to agree with him, but we have to understand him, and to that end that’s the extra effort we always try to make.

Q: How do you make these despicable actions understandable to an audience?

A: Walt’s going to do a lot of bad things as the show progresses — and in some ways we ain’t seen nothing yet. But when Walt is doing some of these dumb things he does, I try to think, what would get me to that point? Why would I make that choice in my life? For instance, when he has to kill Krazy 8, he is in an intractable situation down there. And it’s a situation we’ve seen other movie and television characters in over the years, where the good guy is presented with what looks to be no other option other than killing the bad guy. And yet a lot of the movies and TV shows sort of wiggle out of that scenario by having the bad guy get free and take a shot and the good guy drops him, and it ends up being completely righteous. And I didn’t want to go that way with our show. I wanted Walt to be in a truly intractable situation where he just has to do something terrible. And so the way that we keep him human and likable is that we show his great pain and discomfort at having to do this. And when he kills the guy it’s a horrible, long scene, just to show that this is the way it would really be. It would be horrible to have to kill someone and it would be even worse to have to kill someone in that manner. And when Krazy 8 is finally expired, Walt slides to the floor with him and just mutters “I’m sorry” over and over again.

Log on to the Breaking Bad blog tomorrow to catch the second part of our interview, in which Vince describes Walt as the world’s worst father.