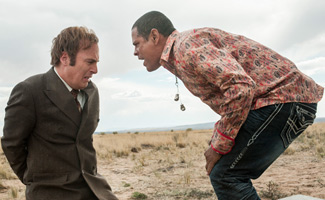 “There are many who are responsible for taking Better Call Saul from ‘Can we actually do this?’ to the biggest series premiere in the history of cable television,” said Charlie Collier, AMC president. “It’s a good day indeed and, at the same time, we all know there’s a lot of road to navigate ahead. We remain collectively focused on sharing, in style, Jimmy McGill’s long, strange trip from nail salon to Cinnabon.”

Missed part one, “Uno,” or part two, “Mijo,” or want to see them again? Watch both of them right now on www.amc.com (no login required).