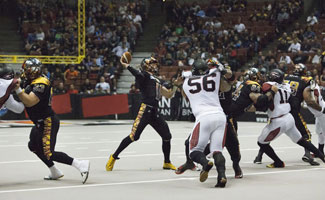 This week, Gene Simmons and Paul Stanley discuss 4th and Loud with TV Guide, while Variety positively reviews the series premiere. Plus, The Wall Street Journal takes an early look at the show. Read on for more:

• Talking to TV Guide about 4th and Loud, Gene Simmons says, “You don’t have to create drama because there’s so much going on in the growing pains of launching a brand-new sports team.”

• The Wall Street Journal debuts a clip from the show where Paul Stanley and Gene Simmons present themselves to the Arena Football League owners “and bring that on-stage confidence they’ve cultivated for over 40 years into a stuffy board room.”

• The Los Angeles Times highlights the Aug. 12 premiere of 4th and Loud, which chronicles Gene Simmons and Paul Stanley’s “foray into the arena-football biz.”

• On ESPN, Bob McMillen, the LA KISS coach, characterizes the team owners, Gene Simmons and Paul Stanley, as “very football friendly. They love the Arena Football League, and that’s why they bought into the league.” [No link]

• The Huffington Post concludes, “4th and Loud will likely end up being more entertaining for KISS fans than football die-hards, but there’s enough of an overlap to make both the team and the series worth following.”

• The Wisconsin State Journal previews 4th and Loud, saying the LA KISS “may look on the surface like a vanity project for some old-school rockers, but for the players, coaches and others involved in the team, success is going to mean more than flashy fireworks and a familiar soundtrack.”

• Ahead of 4th and Loud‘s debut, The Boston Globe says, “Given that this is the network of Breaking Bad and Mad Men, the reality show is more captivating than one might expect.”

• Talking about 4th and Loud, Canada.com explains, “This isn’t an automatic touchdown, but AMC has the Midas touch, so the show deserves a chance to score.”

• 4th and Loud‘s executive producer tells the Orange County Register, “I think it’s fascinating what they managed to do. I think there’s a lot more of the LA KISS story to tell.”

• Star Magazine‘s Can’t-Miss Entertainment Picks for the week included 4th and Loud, calling it “a docuseries that follows Gene Simmons and Paul Stanley as they rock the sports world.” [No link]

• The Las Vegas Sun spotlights Beau Bell and B.J. Bell, a pair of brothers from Las Vegas who played for UNLV and are now members of the L.A. KISS — and who showed up on the series premiere of 4th and Loud.

To stay up-to-date with all the latest 4th and Loud news, sign up for The AMC Weekly.