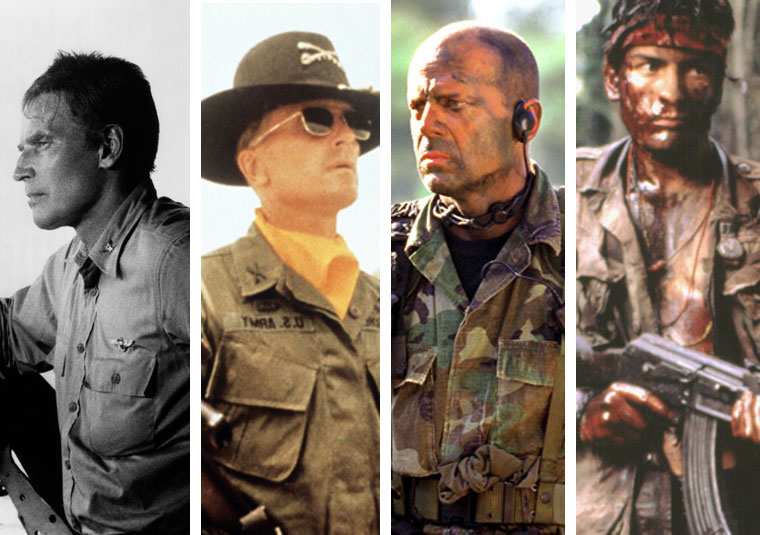 Maybe it's their I-mean-business gazes. Maybe they look good in hats. Or perhaps they've proven themselves to be combative -- both on and off the set. Whatever the reasons, many actors have prolific war-movie résumés. Somewhere along the line, casting directors had lunch and decided guys like Charlton Heston, Robert Duvall, and John Wayne (along with seven others) should appear in uniform often. Memorial Day is the right time to find out which of these actors makes the most upstanding soldier. So which actor's war-movie history earns the most stars? Let the ceremonies begin!

He's starred in Gods and Generals, Geronimo: An American Legend, MASH, and (as Lieutenant Colonel Bill Kilgore) Apocalypse Now. Everyone loves MASH, but Duvall's Frank Burns isn't much of a hero. Many people admire General Robert E. Lee (from Gods and Generals), but there's that whole sticking point of slavery. And as Kilgore, Duvall is a brutal man who delights in war and the misery of others. Amusing as he may be, he doesn't have a first-rate war record.

Cruise wears a uniform well -- and does so in The Last Samurai and as the Nazi Wehrmacht colonel Claus von Stauffenberg in Valkyrie. Being a Nazi? Not so great. In The Last Samurai, he rebels against his own country, albeit for a noble cause. If he hadn't at least tried to take down Hitler, Cruise would be left with zero stars.

Sheen is now famous for other reasons, but he's got a great pack of war movies in his past: Red Dawn, Navy Seals, Hot Shots!, and his crowning achievement -- Platoon. In the Oliver Stone pic, he attempts to murder a superior officer and kills Vietnamese villagers indiscriminately. But he does earn one and a half stars for saving that little girl and fighting off those damn Commies in Red Dawn.

He's appeared in too many war movies to list, but the CV includes Wings, The General Died at Dawn, The Real Glory, Sergeant York, and A Farewell to Arms. The risks he takes for love in A Farewell to Arms -- fighting for his country and for the love of that hot Helen Hayes -- are enough to earn one and a half stars.

Photo by <i>A Farewell to Arms</i>, 1932. Photo courtesy of the Everett Collection.

You've seen him in action in Heartbreak Ridge, Where Eagles Dare, and Kelly's Heroes. And this is Clint Eastwood, after all: you know he has no regard for his own safety. In Kelly's Heroes, he even inspires the same disregard in his fellow soldiers plowing through enemy lines. That's two stars for serious cojones, minus half a star, since it's all money, no morals. But wait: tack another one on for his daring raid on a Nazi stronghold in Where Eagles Dare.

You remember his service in Hart's War and his not-so-great work as a wannabe military tyrant in The Siege, but Tears of the Sun earns Willis quite a few stars. As a Navy SEAL, Willis keeps fighting while wounded and holds onto human-rights principles at any cost, even saving helpless refugees. That's enough to earn three, even if he's a bit too enthused by martial law in The Siege.

Photo by Bruce Willis, <i>Tears of the Sun</i>, 2003. Photo courtesy of the Everett Collection.

Gibson shines as a soldier in We Were Soldiers, The Patriot, and (as William Wallace) Braveheart. The guy loves freedom. He'll fight for it. He'll die for it. He'll make great speeches about it. The only thing keeping Mel from earning more than three and a half stars is that he seems, often, to have revenge as a motive. Courage is courage, but we'd like slightly nobler intentions from Gibson.

Heston's war résumé features The Far Horizons, The Private War of Major Benson, 55 Days at Peking, and more, but the key is Midway, where Heston's Captain Garth keeps cool as a pilot on dangerous missions. Garth plays a huge role in defeating the Japanese, then heroically dies in a crash landing. Two stars for each brave act. Was there any doubt Heston was getting four stars?

Crimson Tide and Glory -- now that's a courageous man. Nothing beats Washington's tear-jerking performance as former slave Trip in Glory. It takes a special kind of courage to fight for the very country that enslaves him. An almost unbeatable four and a half stars.

The king of American movies has played too many war heroes for a top ten list. His courage in The Longest Day, Operation Pacific, and In Harm's Way is commendable, but it's as John M. Stryker in Sands of Iwo Jima that Wayne sets himself apart. The guy casually smokes cigarettes during combat, showing a complete and utter lack of nerves. This is the kind of warrior who knocks an insubordinate soldier out of the way of a rogue grenade. Forget calling him the Duke; we should be calling Wayne the General.

These actors make a habit of appearing in war movies.
No Login Required

Next On The Walking Dead: World Beyond: Season 1, Episode 4

Next On The Walking Dead: World Beyond: Season 1, Episode 4