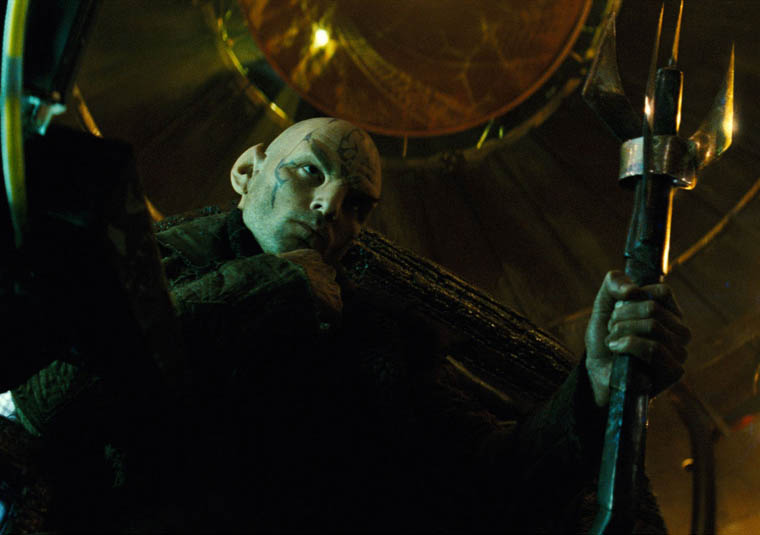 The stalwart crews of the U.S.S. Enterprise have faced down countless foes in their treks through the Final Frontier. We know all too well the altruistic motives of Captains Kirk and Picard, but what warps their antagonists? Remember: In Gene Roddenberry's universe, "evil" never means "crazy."
Photo by <i>Star Trek</i>, Eric Bana, 2009. © Paramount Pictures Corporation. 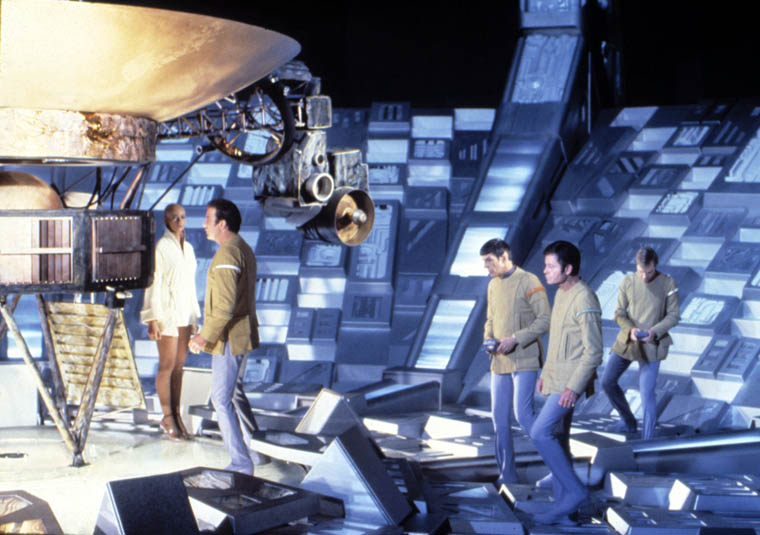 An amorphous cloud wipes out a whole fleet of Klingons, thereby inspiring Captain Kirk to come out of semi-retirement. Kirk or no Kirk, this mysterious miasma (which calls itself V'Ger) continues to head towards Earth and gobble up every ship in its path. Why? It's a case of lovesickness actually. V'Ger is actually a wayward Voyager probe, now self-aware and looking for a human mate. So Kirk, the sly devil, offers up Decker -- his rival for the captain's chair -- and the newly mated satellite sails off happily into the cosmos.
Photo by <i>Star Trek: The Motion Picture</i>, Persis Khambatta, William Shatner, Leonard Nimoy, DeForest Kelley, Stephen Collins, 1979. © Paramount Pictures. Photo courtesy of the Everett Collection. 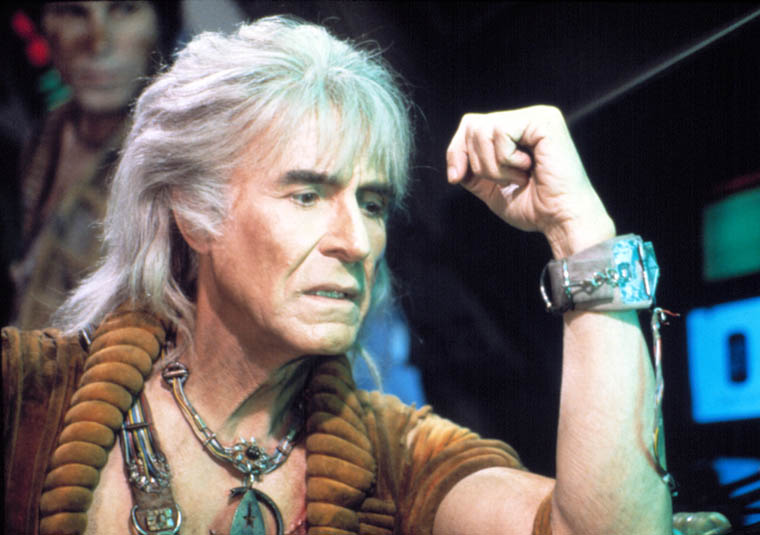 Anyone who memorizes Captain Ahab lines from Moby Dick and keeps a pet killer ear-slug is likely to carry a few grudges. True, Khan brings misfortune on himself (he tried to steal the Enterprise and murder Captain Kirk); still, it's gotta sting to go from Prince on Earth to Refugee on Barren Planet. If only Khan could get over his self-pity he'd have it all: a ship, a new planet, perhaps a decent haircut. But as the Klingon proverb dictates, "Revenge is a dish best served cold." And Khan is one cold baddie.
Photo by <i>Star Trek II: The Wrath of Khan</i>, Ricardo Montalban, 1982. © Paramount Pictures. Photo courtesy of the Everett Collection. 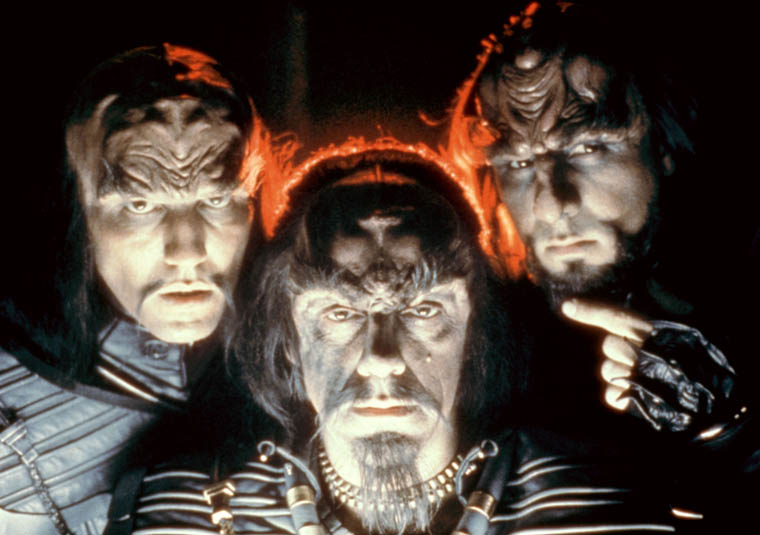 At first the Klingon commander comes off as just plain mean: He destroys a ship delivering intel on the planet-making Genesis device then blows up the U.S.S. Grissom, then kills Kirk's son. But maybe Kruge is just a hardcore patriot! He's labeled the Genesis torpedo as a Federation-sanctioned doomsday device threatening his homeworld. After centuries of hostility between Klingons and humans, can he be blamed? That said, no one's terribly sorry to see this xenophobe fall to his death after a righteous stomp in the face from Kirk's boot.
Photo by <i>Star Trek III: The Search for Spock</i>, Stephen Liska, Christopher Lloyd, John Larroquette, 1984. © Paramount Pictures. Photo courtesy of the Everett Collection. 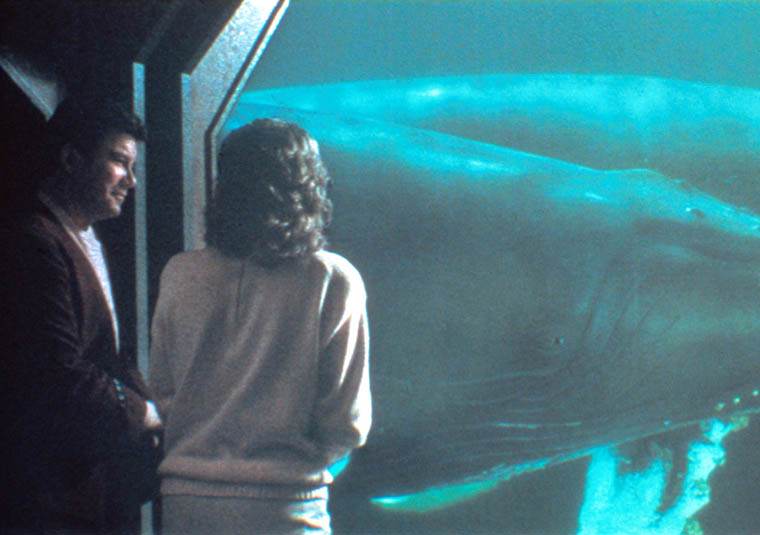 What's on Earth to do when a giant oxygen-depleting Tootsie Roll drifts into the solar system for a chat with an extinct Humpback Whale? Well, you can forget about calling for help because this mindlessly destructive force (aka The Probe) is shutting down every electrical system in sight. It's up to Kirk and crew to travel back in time, kidnap two whales, and get them to tell that probe to buzz off. Yay for interspecies communication!
Photo by <i>Star Trek IV: The Voyage Home</i>, William Shatner, Catherine Hicks, 1986. © Paramount Pictures. Photo courtesy of the Everett Collection. 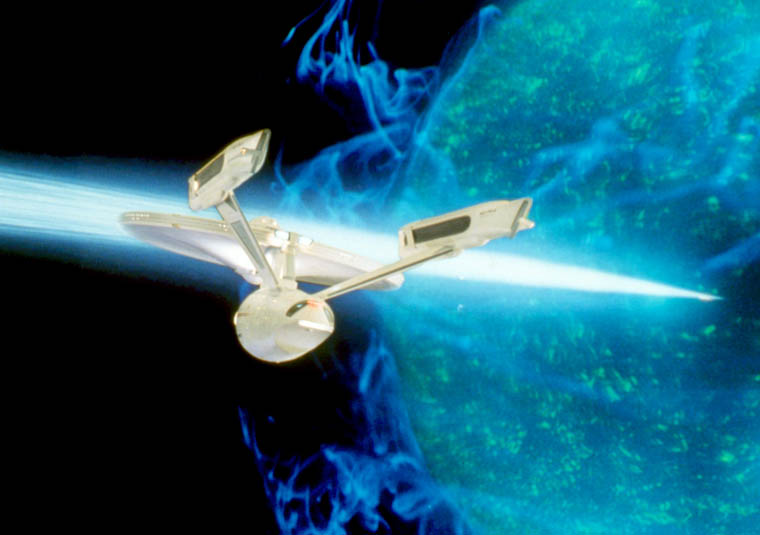 "Hi! I'm God" is a tough pill to swallow, so you can forgive James T. for asking the Almighty for ID when He demands a ride on the Enterprise. After exacting Old Testament-style lightning-from-the-eyes on Kirk and Spock, Sha Ka Ree confesses he's no deity, just a supervillain hoping to escape eternal imprisonment. But cut the guy a break: Delusions of grandeur can be a side-effect of prolonged isolation.
Photo by <i>Star Trek V: The Final Frontier</i>, 1989. © Paramount Pictures. Photo courtesy of the Everett Collection. 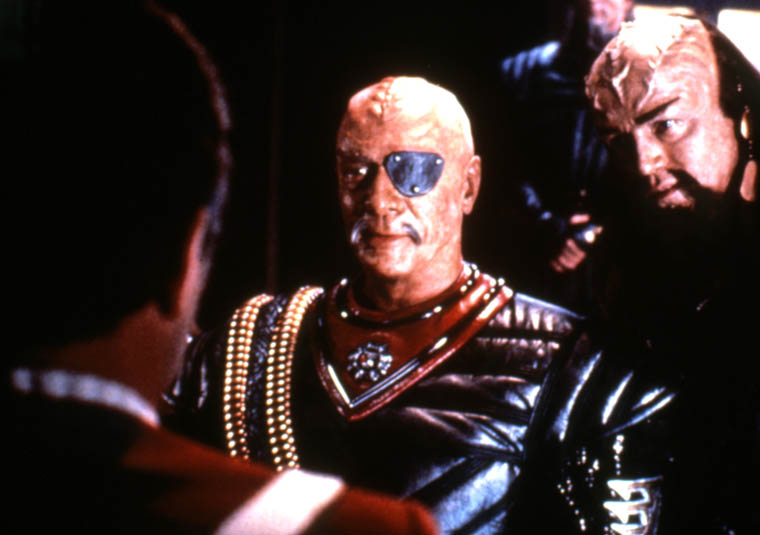 If Capt. Kirk and Gen. Chang prefer going for each others' throats over sharing a glass of Romulan Ale, blame it on Chang's inability to get with the times. He's too stuck in the past: quoting endlessly from Klingon translations of Shakespeare while plotting the assassination of his own High Chancellor. It's not that he's evil, it's just that if peace is "to be or not to be," he'd prefer the latter.
Photo by <i>Star Trek VI: The Undiscovered Country</i>, Christopher Plummer, 1991. © Paramount Pictures. Photo courtesy of the Everett Collection. 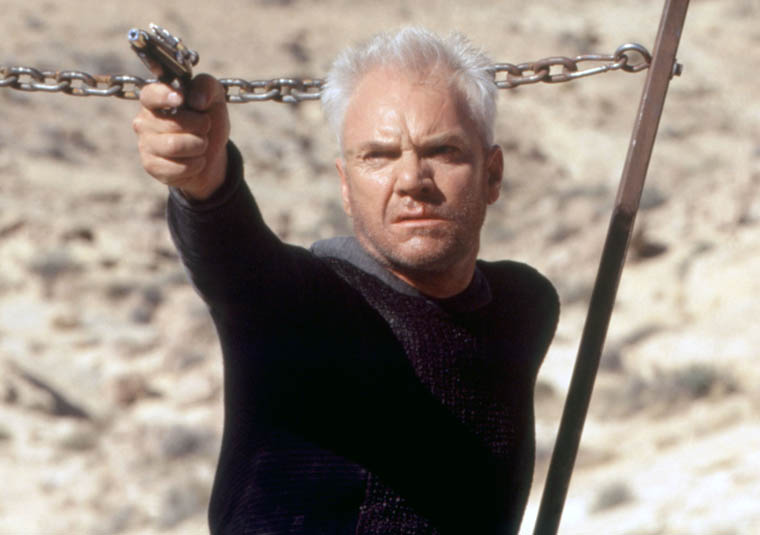 El-Aurians sure live a long time. Before she became a bartender on the Enterprise, Guinan traded barbs with Mark Twain. But for her fellow homeworlder Dr. Soran, longevity is more excruciating than a Klingon painstick: He survives the Borg genocide of his race then he's ripped away from a timeless paradise called the Nexus. Is it any wonder that he'll spend 80 years (and sacrifice 200 million lives) in his effort to find a way back? Now that's emotional baggage.
Photo by <i>Star Trek: Generations</i>, Malcolm McDowell, 1994. © Paramount Pictures. Photo courtesy of the Everett Collection. 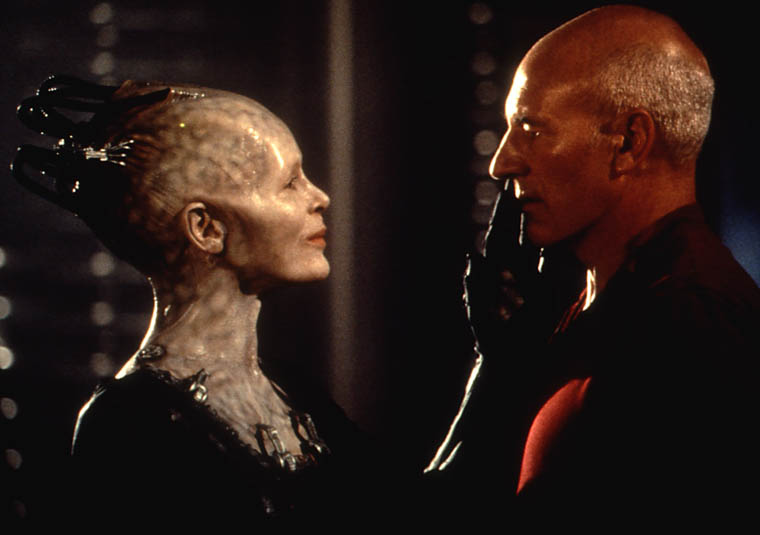 Despite their mantra "resistance is futile," the Borg never assimilate Captain Picard or his crew -- which explains why these troublemakers have chosen to travel back in time to convert humanity to a form of super-Communism. The Borg don't mean to be fascists; they're just a little too sold on group effort. The logic behind their hive mentality certainly has its flaws, but at least their collective heart is in the right place.
Photo by <i>Star Trek: First Contact</i>, Alice Krige, Patrick Stewart, 1996. © Paramount Pictures. Photo courtesy of the Everett Collection. 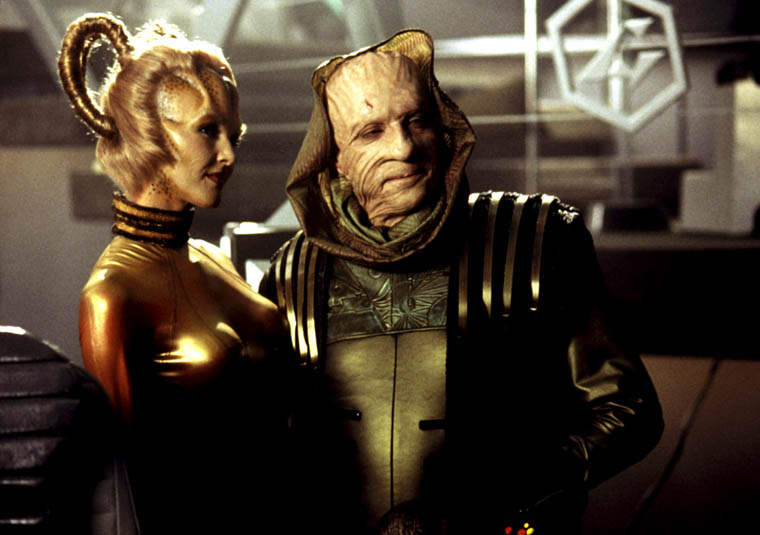 The heart of the explorer cannot be domesticated; he'll even give up immortality to travel the universe. Case in point: Ru'afo who's star-hopped from galaxy to galaxy at the price of living forever. It's a choice that's made him bitter however. So many postcards; so much regret. Now he's out to exact revenge upon members of his Utopian tribe who have stayed put. He's going to harvest the life-giving power of his planet's rings even if it kill all inhabitants. And you thought the American tourist was the epitome of selfishness.
Photo by <i>Star Trek: Insurrection</i>, F. Murray Abraham, 1998. © Paramount Pictures. Photo courtesy of the Everett Collection. 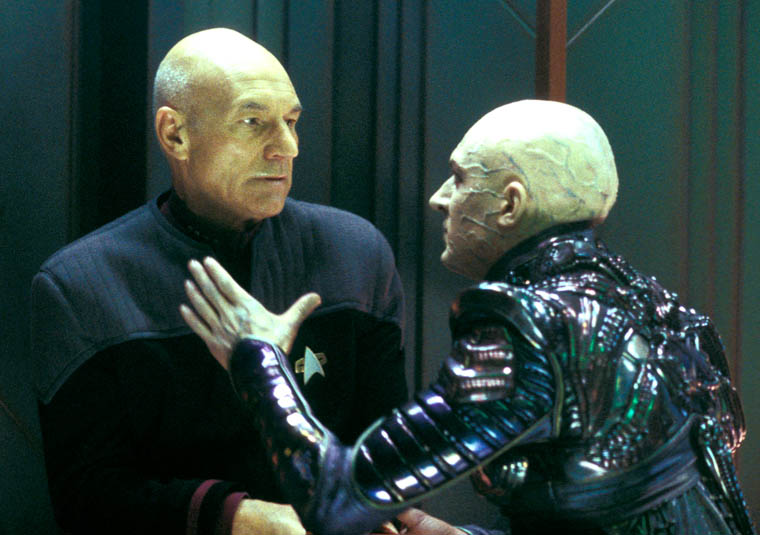 What would've happened if Capt. Picard had been raised in a dilithium mine under the lash of Romulan guards instead of by loving parents on a handsome vineyard? He'd turn out just like Shinzon, his spiteful clone. A prime example of the nurture over nature argument, this power-crazed ne'er-do-well is determined to never bow before authority again. He is authority!
Photo by <i>Star Trek: Nemesis</i>, Patrick Stewart, Tom Hardy, 2002. © Paramount Pictures. Photo courtesy of the Everett Collection. 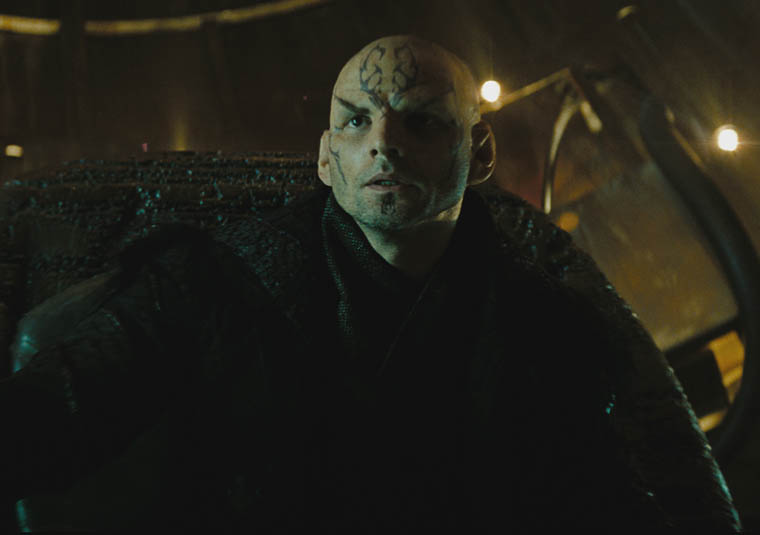 Watching your homeland disintegrate in the wake of a supernova certainly constitutes a traumatic experience. But Nero isn't about to internalize the pain. This vengeful Romulan miner is focusing his rage on Spock, who despite his best efforts couldn't prevent the disaster. Nero's dogged determination over 25 years is admirable -- as far as, you know, genocidal maniacs suffering from PTSD go.

Who is your favorite Star Trek movie villain? Click here to vote in the poll!
Photo by <i>Star Trek</i>, Eric Bana, 2009. © Paramount Pictures.

We know all too well the altruistic motives of Captains Kirk and Picard, but what warps their antagonists?
No Login Required

The Making of El Camino

Dispatches From Elsewhere: The Opening Minutes of Season 1, Episode 1

El Camino: Breaking Back Into Character

The Making of El Camino

Dispatches From Elsewhere: The Opening Minutes of Season 1, Episode 1

El Camino: Breaking Back Into Character