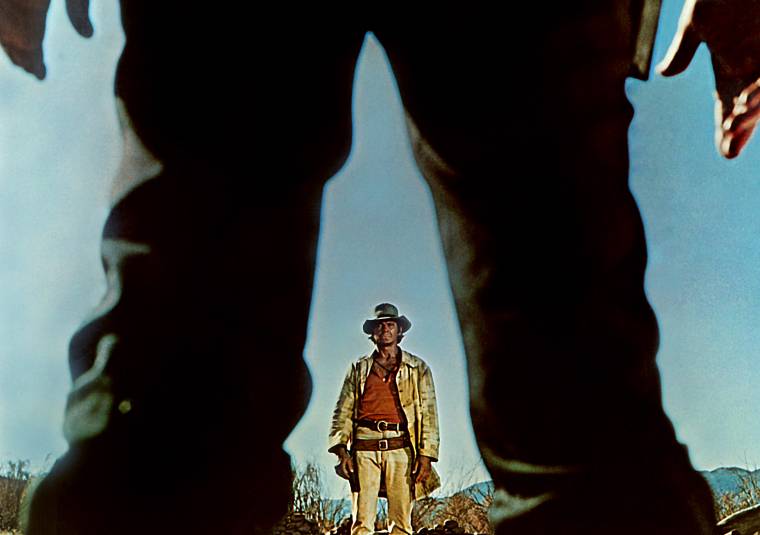 A Western just isn't a Western without at least one good shootout. So it goes to follow that a great shootout pretty much means a great movie. Here are ten battles that set the standard for the genre.
[Text by Michael Rowin]

Photo by <i>Once Upon a Time in the West</i>, Charles Bronson, 1968. Photo courtesy of the Everett Collection. 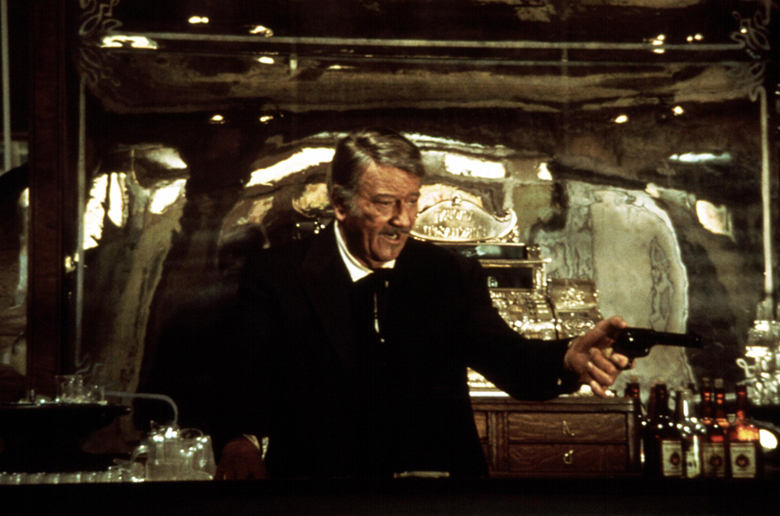 In his final film, the Duke goes out in a blaze of glory as his one-foot-in-the-grave gunfighter is cut down in a barroom. Sure, it's a scene reminiscent of many other John Wayne movies, but since the star was dying himself, the real-life parallel is especially powerful.
Photo by <i>The Shootist</i>, John Wayne, 1976. Photo courtesy of the Everett Collection. 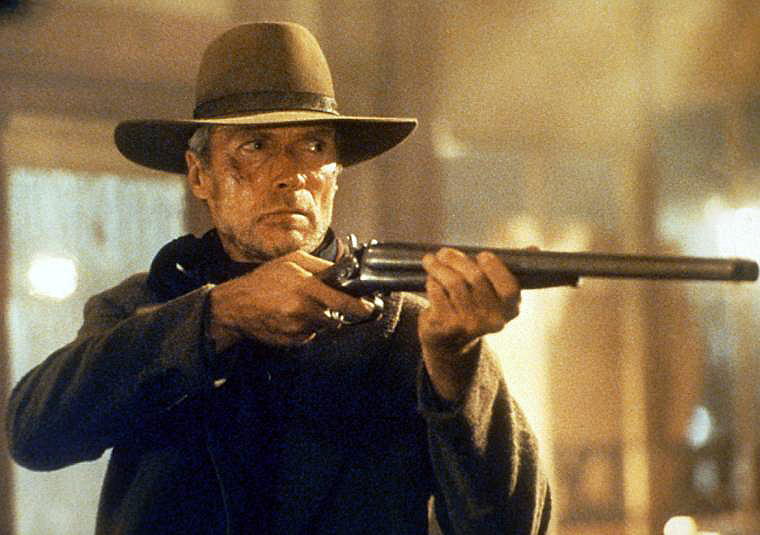 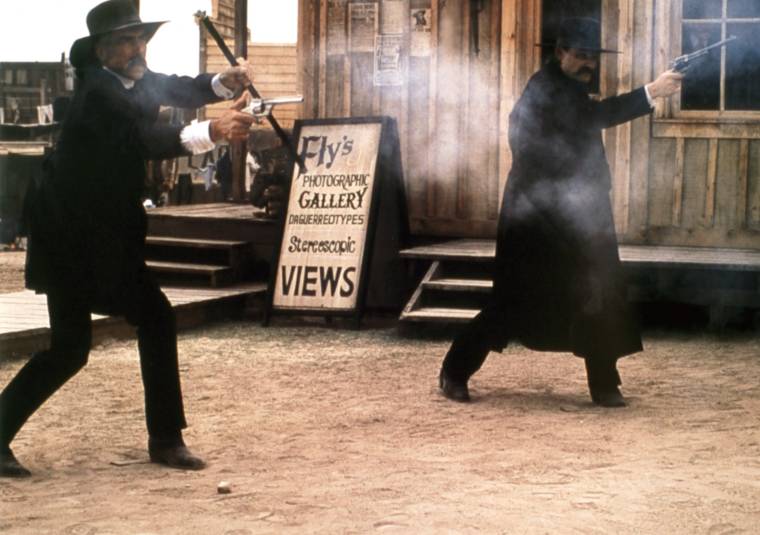 Wyatt Earp's showdown at the O.K. Corral has been portrayed on screen countless times. But never better than in Tombstone. Kurt Russell (Earp) and Val Kilmer (Doc Holliday) are appropriately iconic for the most famous shootout in American history. And even when it's over, it's not over: As the dust begins to settle, the one remaining Cowboy reaches for his gun -- only to be taken down.
Photo by <i>Tombstone</i>, Kurt Russell, Sam Elliott, 1993. © Buena Vista Pictures. Photo courtesy of the Everett Collection. 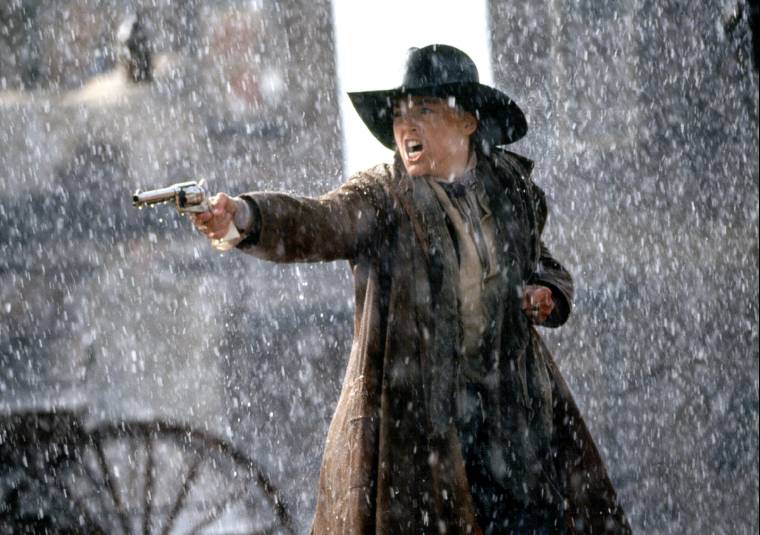 Sam Raimi's estrogen-powered Western pivots around a dueling tournament, so there's no shortage of showdowns. The best is saved for last: Sharon Stone guns down her father's killer (Gene Hackman), who only registers that he's been shot when he notices his shadow's got a hole in it.
Photo by <i>The Quick and the Dead</i>, Sharon Stone, 1995. © TriStar. Photo courtesy of the Everett Collection. 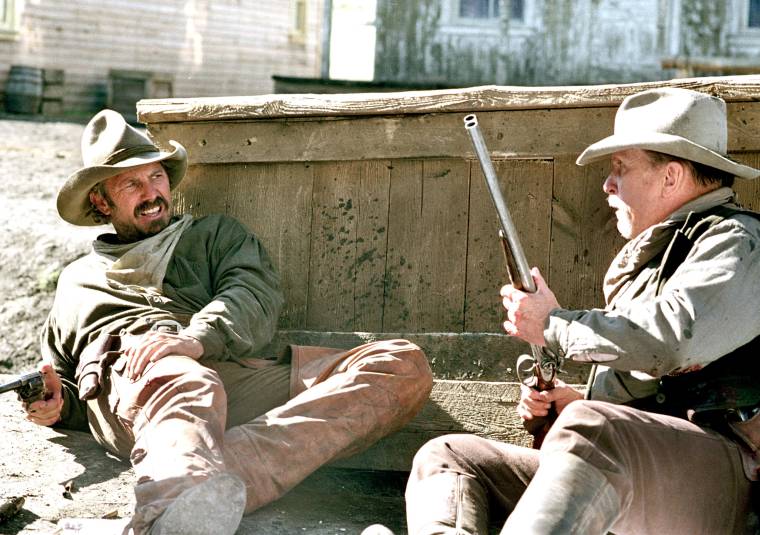 Kevin Costner and Robert Duvall take on land barons with six-shooters and rifles as every doorway, corner, and barn loft of the nearly-deserted town is used to its full advantage. And while the conflict starts off as two against five, the remaining townsfolk screw up the courage to join in an intense gunfight that lasts a full fifteen minutes.
Photo by <i>Open Range</i>, Kevin Costner, Robert Duvall, 2003. © Touchstone. Photo courtesy of the Everett Collection. 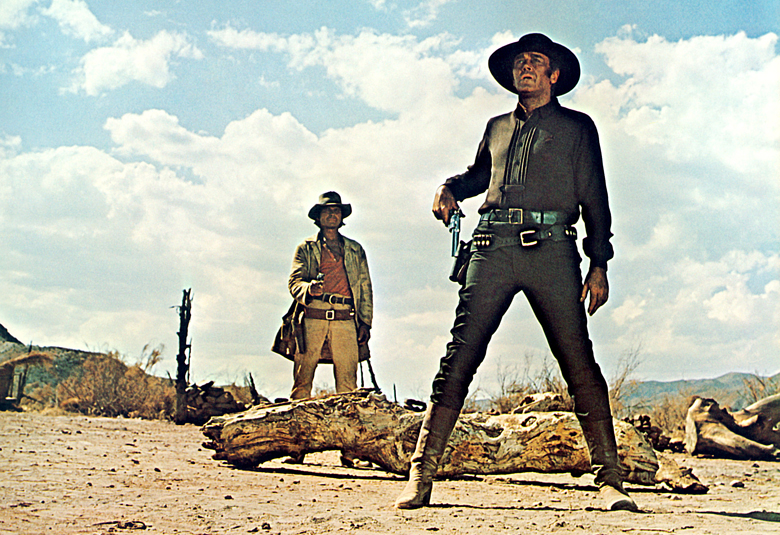 Once Upon a Time in the West's epic saga is bookended by two memorable battles. The opening has Charles Bronson's lone harmonica-playing gunman dueling three hired killers all by himself. The finale is even better: A standoff between Bronson and Henry Fonda punctuated by a flashback explaining Bronson's vendetta.
Photo by <i>Once Upon a Time in the West</i>, Charles Bronson, Henry Fonda, 1968. Photo courtesy of the Everett Collection. 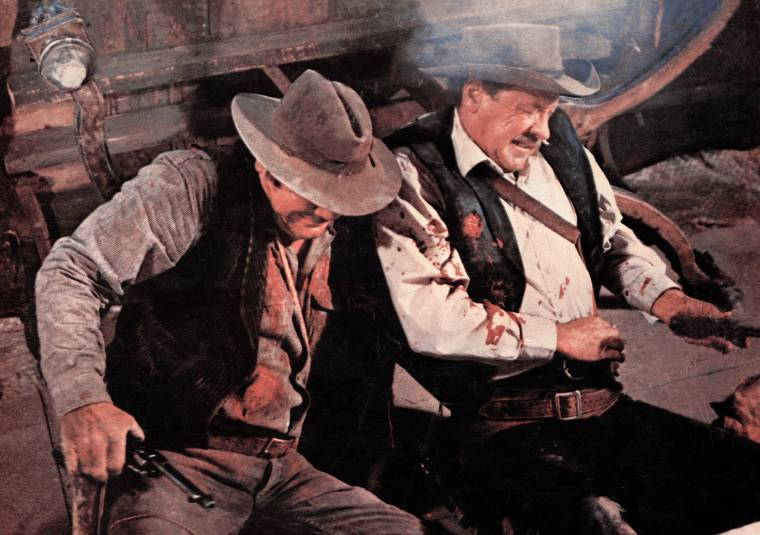 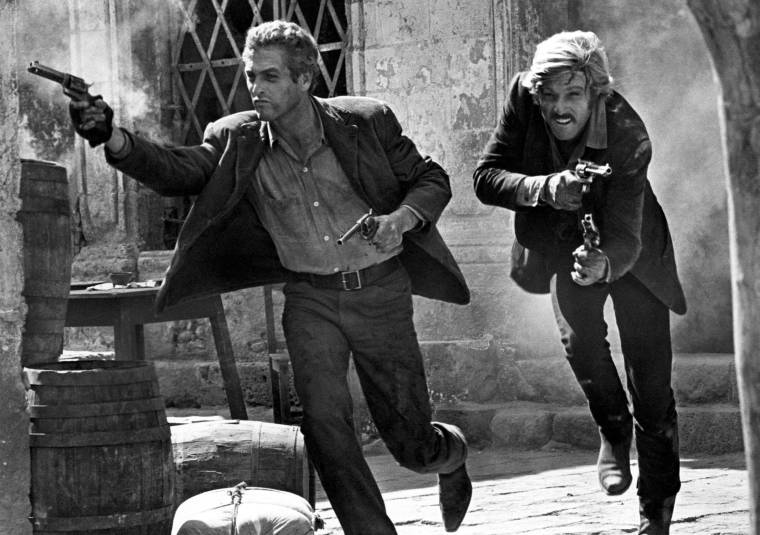 Butch Cassidy and the Sundance Kid has no shortage of classic moments. Even so, the movie's final shootout stands out: When the two robbers -- bleeding and limping -- leap headlong into certain death, the picture freezes. Our heroes are captured at the height of their fearlessness. Talk about making a statement.
Photo by <i>Butch Cassidy and the Sundance Kid</i>, Robert Redford, Paul Newman, 1969. © 20th Century Fox. Photo courtesy of the Everett Collection. 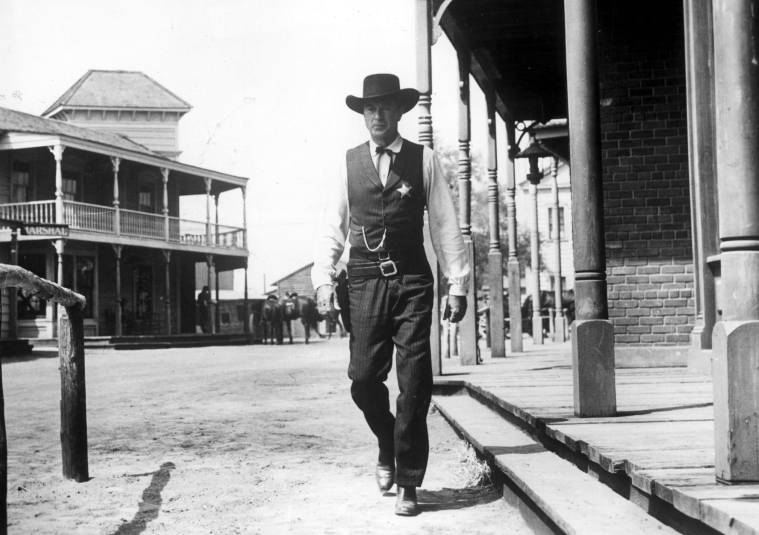 Gary Cooper spends most of High Noon trying to gather support against a man hellbent on revenge. Yet when the clock strikes twelve, Cooper stands nearly alone. The resulting shootout is a breathtaking battle against the odds (leading to a Pyrrhic victory).
Photo by <i>High Noon</i>, Gary Cooper, 1952. Photo courtesy of the Everett Collection. 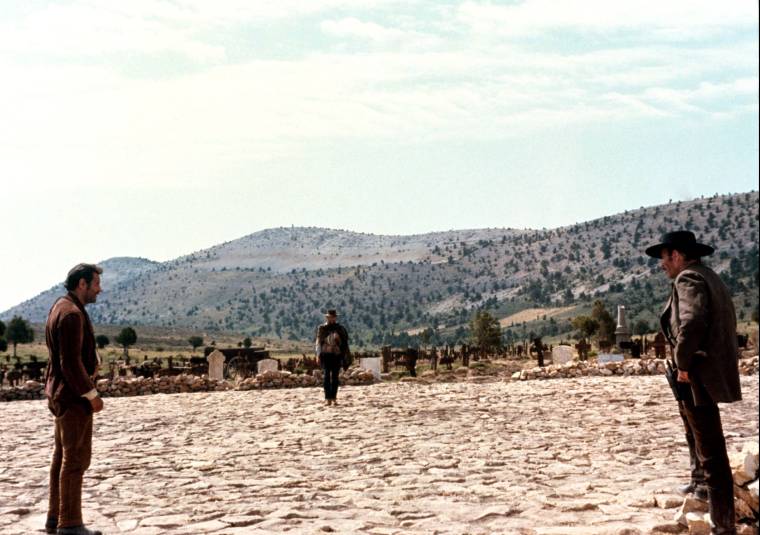 Sergio Leone's sense of theatricality is unrivaled. Who else would set a duel in an isolated cemetery? And who would make the final shootout between three instead of two banditos? That the actors are Clint Eastwood, Lee Van Cleef, and Eli Wallach is really just icing on the cake.

Which Western has the greatest shootout? Click here to vote.
Photo by <i>The Good, the Bad, and the Ugly</i>, Eli Wallach, Clint Eastwood, Lee Van Cleef, 1966. Photo courtesy of the Everett Collection.

A Western just isn’t a Western without at least one good shootout. So it goes to follow that a great shootout pretty much means a great movie. Here are ten battles that set the standard for the genre.
No Login Required