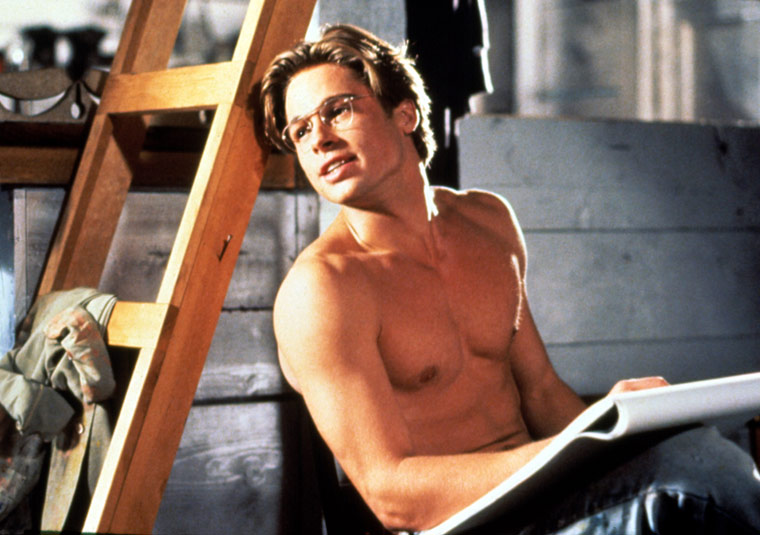 Your average movie theater is generally the temperature of frozen tundra, but when one Mr. Brad Pitt strolls on screen, things heat up. Sure he's got a face that's more beautiful than some of his leading ladies and he’s not a bad actor per se, but you can be forgiven if you’re really just waiting for the moment when he takes off his shirt. From indie to big budget, any movie gets that much more riveting when Pitt's abs get their moment in the spotlight. Lose yourself in this list of Pitt’s hottest, scantily-clad moments.
Photo by <em>The Favor</em>, Brad Pitt 1994. Photo Courtesy of The Everett Collection 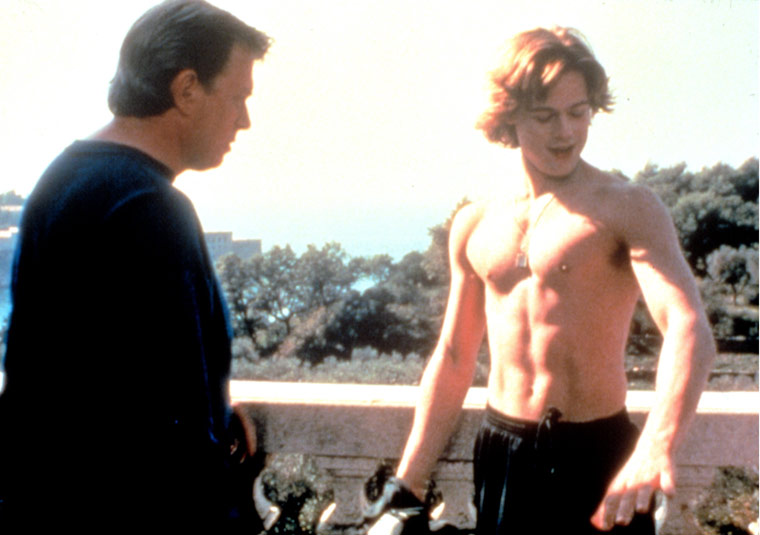 Not necessarily a movie you'd expect to see on a list of Pitt's best shirtless roles... In this drama, Pitt plays Rick, a strapping young man diagnosed with a horrible disease that will cause him to die within three days if exposed to the sun. Best to overlook the glaring question of how exactly Rick got quite so tan and toned if all he does is sit around in the dark -- apparently there isn't much to do in there besides work on his abs. The suspension of disbelief this one requires keeps Rick at the bottom of the list.
Photo by <em>Dark Side of the Sun</em>, Guy Boyd, Brad Pitt 1997. Photo Courtesy of The Everett Collection 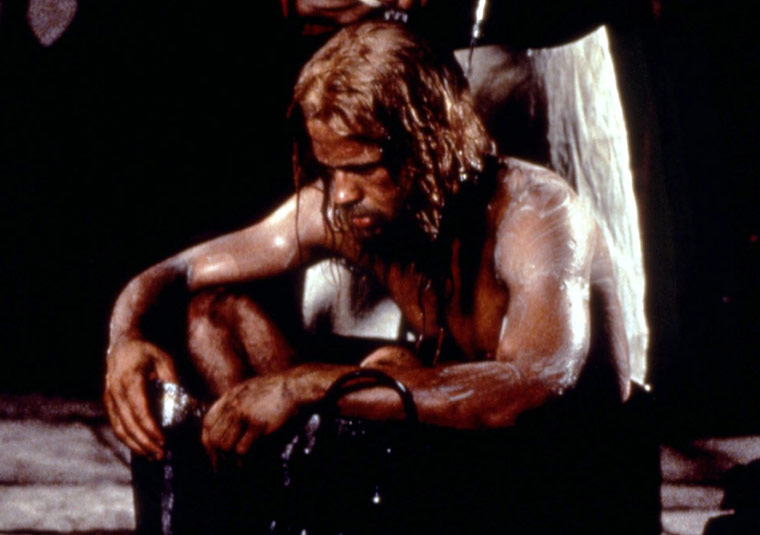 Hey, there’s something to be said for Pitt’s rugged, mountain-man look in this historical epic. Still, though it’s easy to admire Heinrich Harrer's (Pitt) fierce devotion to his cause and persistence in the face of danger, the small amount of screen time devoted to Pitt's chest demotes his role in Seven Years in Tibet to number eight. Those pecs are holy, and deserve to be treated as such.
Photo by <em>Seven Years in Tibet</em>, Brad Pitt, 1997, © Sony Pictures. Photo Courtesy of The Everett Collection 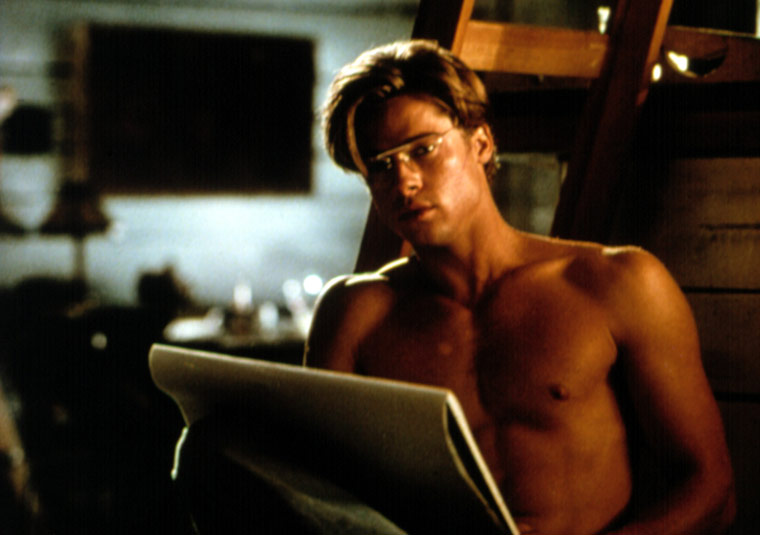 Pitt's story is a subplot in this movie, but boy are we glad it's there. His role both in and out of the plot is simply to be eye candy, a task he accomplishes with ease. When Pitt’s Elliott isn't lounging around doing his art (sans smock, of course), he's hanging out in bathrobes in hotel rooms. What's not to love? A bit more skin screen time and Elliott might have made it past the seventh spot on the list.
Photo by <em>The Favor</em>, Brad Pitt 1994. Photo Courtesy of The Everett Collection 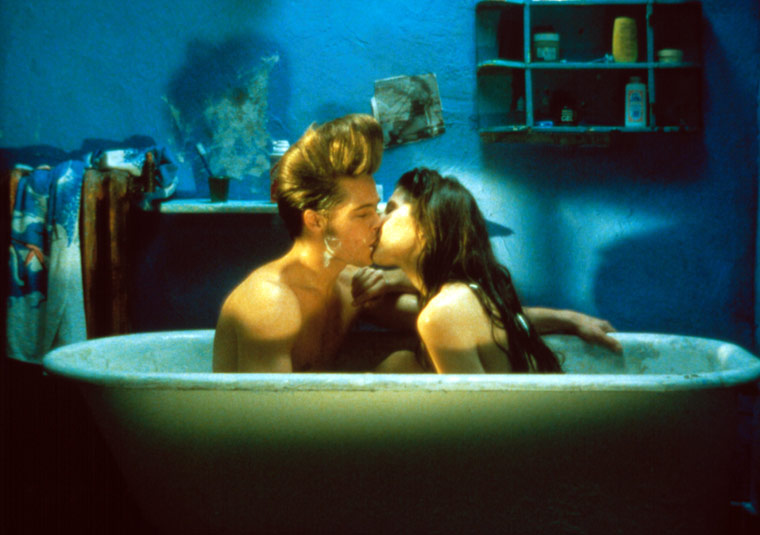 In this lesser-known flick, Pitt's character's childlike naievete doesn't prevent him from scoring with the ladies. Suede's oh-so-innocent eyes are more than enough to get him into the tub with Catherine Keener. But innocence goes out the window for everyone involved (audience too!) when those two strip down. Pitt's wet, shirtless (and we can only imagine pantsless) glory is enough to make Keener say the L-word, but that mile-high pompadour keeps him back at sixth place.
Photo by <em>Johnny Suede</em>, Brad Pitt, Catherine Keener, 1991. Photo Courtesy of The Everett Collection 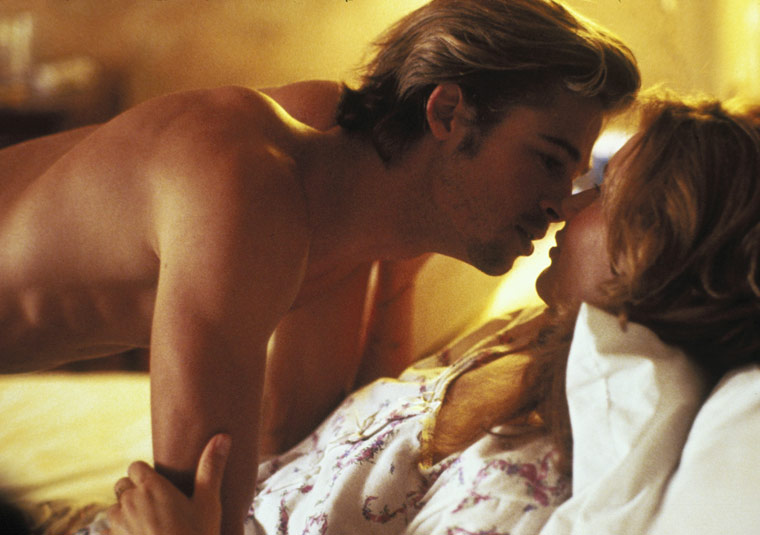 The role of J.D. in Thelma and Louise was the one that brought Brad Pitt's name (and fine physique) to the masses. Is it a coincidence that his steamy sex scene with Geena Davis featured more than just a bare chest? Probably not. However cute his figure is, though, it doesn't excuse J.D.'s ungentlemanly behavior, which keeps him smack dab in the middle of this list.
Photo by <em>Thelma & Louise</em>, Brad Pitt, Geena Davis, 1991. © MGM. Photo Courtesy of The Everett Collection 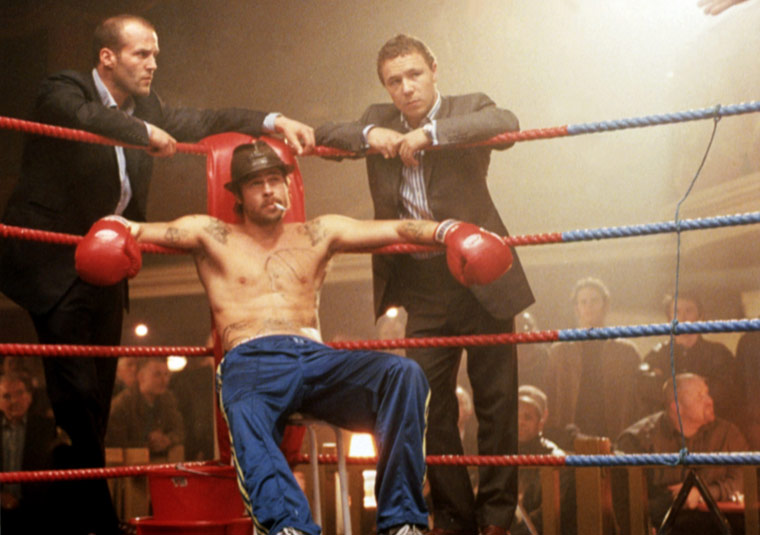 Mickey O'Neil (Pitt)’s opponents in this fight flick get extra credit, since just the sight of Mickey stripping off his shirt for the match is enough to bring most people to their knees. Honestly, nobody really cares that you can't understand a word that comes out of his mouth... No one watches this movie for the stimulating dialogue. Even bruised and battered, Mickey still makes it to number four here -- it's a list about Pitt's gorgeous chest, not his face, so he’s allowed a black eye or two.
Photo by <em>Snatch</em>, Jason Statham, Brad Pitt, Alan Ford, 2000. Photo Courtesy of The Everett Collection

You know an actor's got some serious sex appeal when he spends the first half of the movie as a wrinkly old-man-baby, yet as soon as he hits the hot prime-of-life phase you're still ready to rip the shirt right off him. As the titular Mr. Button, Pitt makes dreams come true with the wisdom (and experience!) of a mature gentleman trapped in the body of a 20-year-old in his physical prime. What woman hasn't dreamed of just this combination? Kudos and third place to you, Mr. Button.
Photo by <em>The Curious Case of Benjamin Button</em>, Brad Pitt, Cate Blanchett, 2008. ©Paramount. Photo Courtesy of The Everett Collection 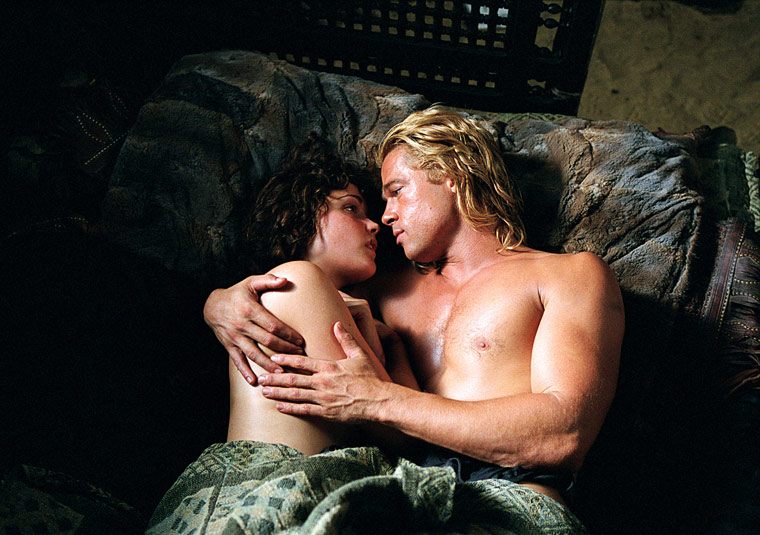 According to Greek mythology, Achilles was the masculine ideal, so it's only fitting that Pitt fill the role in this big-budget epic. The filmmakers got this casting right on the money. Achilles takes second place because the sight of Pitt's naked torso is enough to turn a raging kidnapped beauty away from her murderous intentions and lure her straight into his bed. His muscles are so rock-hard it's conceivable her blade might have bounced right off anyway. Pitt’s Achilles could only be beat out by one other role, namely…
Photo by <em>Troy</em>, Rose Byrne, Brad Pitt, 2004, (c) Warner Brothers. Photo Courtesy of The Everett Collection 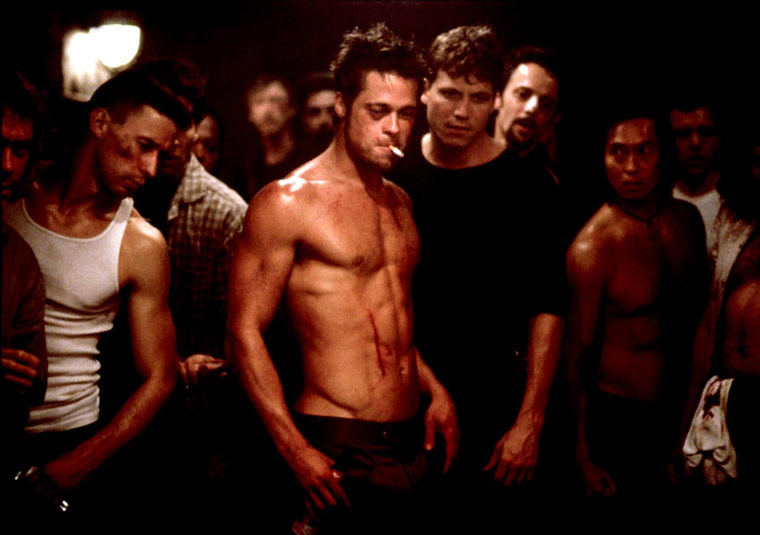 Who could blame scrawny little Edward Norton for wanting his alter ego to look like Brad Pitt? Tyler Durden (Pitt) is lean and mean, without an ounce of body fat on that enviable form. Not even dingy lighting and a not-so-light coating of grime can take away the appeal of Pitt’s ridiculous physique. For the ability to shine brightest in dim light and evoke the most base of physical desires just by removing his shirt, Durden takes first place.
Photo by <em>Fight Club</em>, Brad Pitt, 1999. TM and © 20th Century Fox Film Corp. All rights reserved. Photo Courtesy of The Everett Collection

Brad Pitt steams up the screen
No Login Required

Fear the Walking Dead: A Look at Season 6

The Walking Dead: The Epic Final Season Begins in 2021

Fear the Walking Dead: A Look at Season 6

The Walking Dead: The Epic Final Season Begins in 2021