Stoic, confident, and unwavering, Carolyn Martens (as played by Fiona Shaw) was a fan favorite from the start. From casual anecdotes about Coke drinking rats, to laser sharp quips that best even the snarkiest of us, Carolyn’s presence brings a certain electricity to every scene. In Season 3 we’ve been graced with even more of Carolyn, and as we’ve come to know her more, we’ve come to realize we still have many unanswered questions. We recently chatted with Shaw and did our best to extract as many scintillating morsels as possible— dive in below to see how successful we were.

Q: So much happens this season for Carolyn—from losing her station at MI6, to losing Kenny, and the introduction of Geraldine—we get to learn a lot more about her backstory and past. What backstory (if any) did you invent for younger Carolyn when she was just starting out in the field?

A: That's a very difficult question because I think Carolyn keeps many more secrets that haven’t even been touched on yet. The great joy of this character is that she surprises us at every turn. So a backstory for her would solve too much, and I think the amazing thing about Carolyn is that she can morph and adapt to any world she’s put in. If we set a few episodes in Africa, I think you'd find that Carolyn has a lot of acquaintances there. If you set them in New Zealand, I think you’d also find that Carolyn would know people there. That's her nature. So I think any backstory would limit her.

That said, I do know that she actually went to Oxbridge and was probably heading for an academic life, but she was much more excited to be taken up by MI5 and then MI6. I think that's a passion of many people who have worked in this spy world—they have a slight academic element. She was obviously very talented and very eccentric, but she hasn't followed the obvious path of someone with her skills. I would be very sad to define her by the countries she's been to, or to be given knowledge about her past that would make me have certain expectations about her direction or behavior.

You've also got to watch out for how many children she has! You don't know! I’m only given information on a need-to-know basis, which is very good for me as an actor. I also think it makes it more exciting for viewers! These characters who have been invented for the show don’t have the same sort of history as you and I have, you know? I do know how many brothers I have, but I don’t think it wouldn't be useful to the project to know how many brothers, sisters, sons or daughters Carolyn has. Or husbands for that matter! 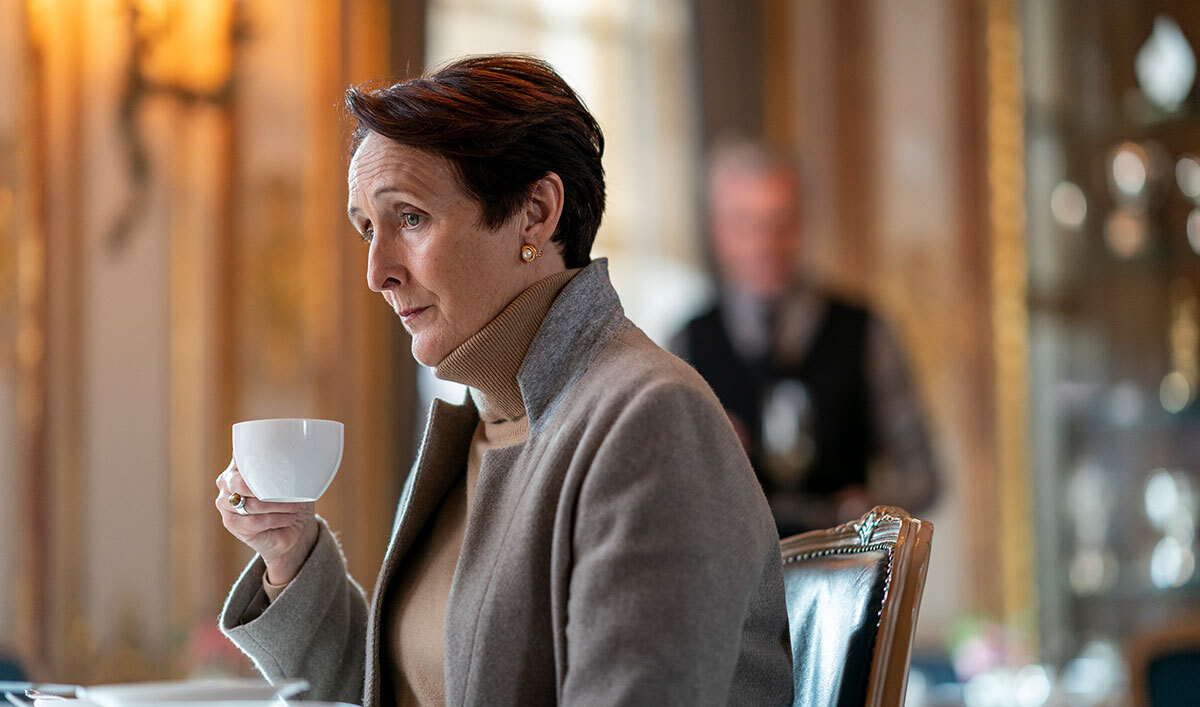 Q: How does Carolyn truly feel about Konstantin? Their relationship is so complicated and tenuous but there’s obviously emotions there that impede her from… washing her hands clean of him.

A: I think she felt a bit caught out in Season 1 by Konstantin’s connection to her and the feeling that he had a desire to awaken that connection. The sense I had was that these two people had not seen each other for a long time and so too with the other Russians, so she's head of the Russian desk but she hasn't been around them. It just so happened that around that time Konstantin was spending an enormous amount of time in London, which he hadn't before but she kept her distance from him. Because of the disaster with Kenny, he comes back again. So of course their acquaintanceship, which might have been put neatly in a box before, is now being reawakened by the plot. I think that's what's complicating it. She's quite compartmentalized, you know, Carolyn. I think her feelings about him are unresolved in her head. I mean, they may end up doing something huge together. We don't know that yet, and they wouldn't know that yet either. Who knows, maybe more things about their past might emerge.

Q: Your chemistry with Kim Bodnia is just electric—how has the relationship between you two changed over the seasons and what has it been like working with him?

A: Kim has done an enormous amount of work in Denmark and in the world, both in English and in Danish, so he's a very experienced actor. We both didn’t need an enormous amount of introduction to each other because I didn't know him at all when we started, and regardless we got on very, very well. He works very hard and so do I.

I think it's just that we bring ourselves totally to these characters, and because of that he’s an absolute pleasure to work with. You're really working with a grown-up! You're really working with somebody who's done their homework, and you're working with someone who is both open and entirely ready. I think I could throw anything at Kim, and he'd manage to reply truly in that moment. He's marvelous. So working with him is a great pleasure. When we've got a scene together, we always kind of hug and jump and go, "This is great!" Usually it's an awful fight with each other or something, but it's very, very good. He's a very grounded person, with a tremendous about of confidence. He has self-respect, which is a wonderful thing to have.

Q: Carolyn is tough on the outside, but we see beneath the veneer this season when she loses not only Kenny her biological son, but also Mo her protégé in the making. She deals with grief in very unusual ways, like listening to classical music and eating her sandwiches. Which is just so Carolyn. Can you speak a bit about the emotional rollercoaster she’s on this season and how it may impact her going forward?

A: I think meeting a character is like meeting someone at a party. When you first meet somebody at a party, you make certain quick decisions about them. We've met Carolyn at work, so we’ve made certain decisions about her based on that environment. But like all people, she's both consistent and inconsistent.

We’ve seen Carolyn at work where she's at the top of her game. Obviously, she's made mistakes, but she's mainly at the top of her game. And then something personal happens, and of course personal things always expose characters in a different way. She can't rely on her usual strengths with personal matters, no more than any of us. I think it's really important that these characters are human. They're not superhuman.

The show focuses on their great skills, but they're also just people, and that’s true this season, more than ever. I think it was very wise, that in the third season, the audience wasn’t shown the same set of skills for Carolyn. They get to see her challenged in the very place she would hate, emotionally! She’s not very good at it and she’s not very fluent either. It doesn't mean she doesn't feel things, you know. So this year you do get to see something you've never seen before in her. I really like that I can rip the humor out of it, because I do think good comedy should have as many tears as laughter, so I'm very happy to play with that humor. 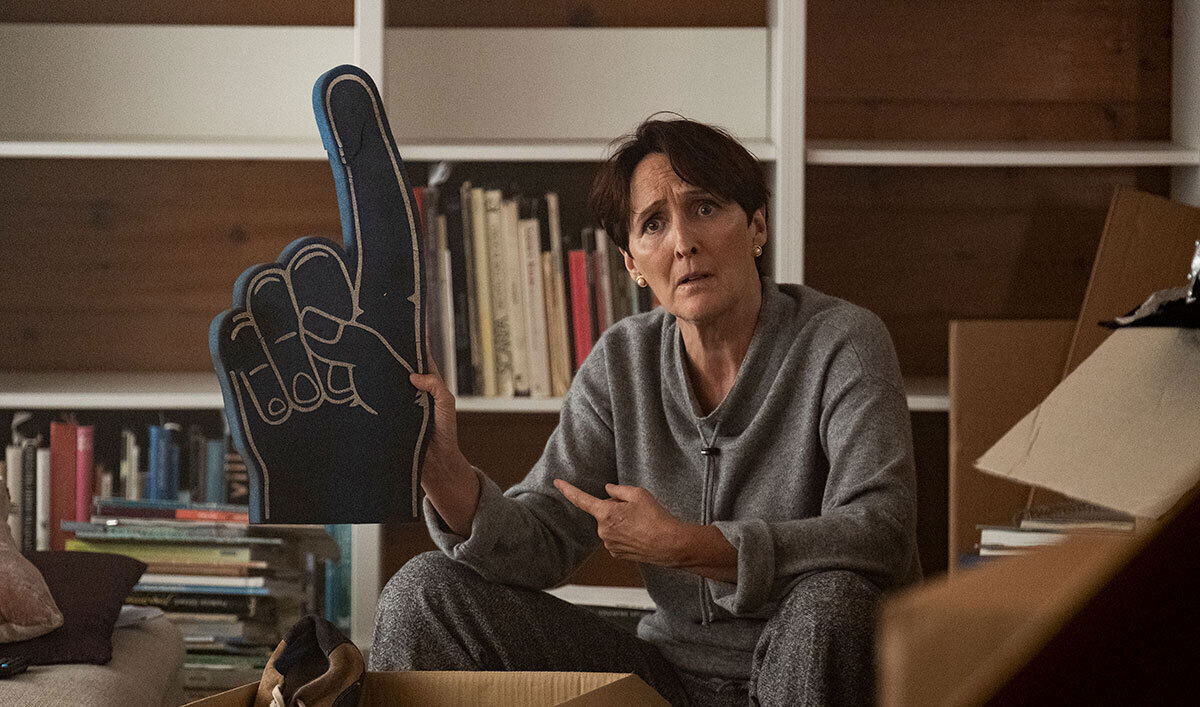 Q: Carolyn seems to have very intense feelings about The Twelve, but they’re never fully revealed. From your perspective, what is her end goal in regards to The Twelve? What’s her real motive? She’s said it’s impossible to stop them, but then what is really driving her to try to?

A: She may be head of The Twelve, for all you know! The plot is like an onion, isn't it? You just don't know. The story being told is that she's trying to catch them, but I think this season, it became clear that she begins to understand something else. The enemy, the physical enemy, is only the tip of the iceberg. The real enemy is ourselves, and I think she begins to see that.

The Twelve is a condition of worry, of anxiety. You think you're going to get them. You think they are 12 men or 12 women or 12 people, and they're called The Twelve. But what are they?! They're a force that seems to disrupt values that we all hold dear. Coronavirus is definitely something of The Twelve! So I think she gets philosophical about The Twelve, and I think that's useful for the audience.

So we catch The Twelve then at some little pharmacist down on the Essex Road. So what? It's not really about that, is it? It's more about why we’re always suspicious that we're not actually in control of things. The series is superb at exposing the precariousness of life. You’ve got three women, Eve, Villanelle, and Carolyn, who all seem to have opted for an exciting life, and with that excitement also comes huge loss, self-abnegation, and surprises that are not pleasant. I think that's also about The Twelve, isn't it? It's about the way in which you pay a price. You don't get anything for free, you know? I mean, it's not The Twelve who are causing their upsets, but it's the pursuit of The Twelve that's causing their upsets. It's in pursuing The Twelve that they all get screwed over.

A: I want her to go very far away! I think she will have to leave and go somewhere amazing, and I hope the camera will go with her! I think she'll have to get out of dodge, don't you? The thing that I think was very surprising about this is that we’ve never seen Carolyn commit a crime.

People who work for MI6 have to endure, and sometimes people get killed without going through a court case. There are people who are being killed on our behalf without them having had the due process of law. I think what's very clear, is that now we’ve seen Carolyn commit a serious crime. You can call it a necessary one, but I think it means that she has to go very far away. She'd have to be very quiet about it. It was a very bad thing to have done. I don't think she minds telling other people to slightly clear up a mess if they're willing to, but I don't think Carolyn normally takes any violence in her stride. You can't, not if you're a moral person you can't.